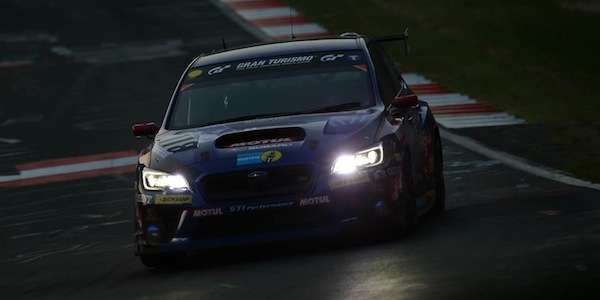 The 2015 Subaru WRX STI Nurburgring 24-hour race results are in. It was a tough day for the team.
Advertisement

The results are in for the crash plagued Nurburgring 24-hour race. The 2015 Subaru WRX STI finished 4th in the SP3T class and 32nd overall. This year’s 24 Hours Nurburgring race was tough for the 2015 WRX STI NBR team with continuous yellow flags in the first half, and mid to final stages that were plagued with car troubles caused by an earlier accident.

It takes a total team effort to make it to the checkered flag after 24 grueling hours of non-stop racing. The entire Subaru WRX STI team and all drivers worked tirelessly to score that checkered flag showing extreme discretion and endurance. This was the first race for the new-generation STI and the team learned some valuable lessons.

The race plagued with accidents

The race saw numerous crashes and accidents in the first half and the WRX STI was caught behind yellow flags and was unable to post any great times. Then the WRX STI was involved in an accident around the 4:45 mark and was forced into a pit stop after the accident caused a flat front right tire. Then it went from bad to worse as the STI experienced drivetrain problems at 8:40.

The WRX STI damage and drivetrain problems were repaired with minimal downtime owing to the exceptional skills of the best dealer mechanics that Subaru Tecnica International brings in from around Japan. The WRX STI was back in action on the track, and drove smooth the rest of the race.

The team is imposed a costly penalty

But at 2:00am in the morning, race officials noticed the WRX STI passing another car in a yellow-flagged section and imposed a time penalty during the 11AM pit stop to make up 3:22 minutes. The STI had to wait in the pits for what seemed like “an excruciatingly long time,” making the race that much tougher for the entire team. That penalty cost the WRX STI valuable time.

The Audi TT team dominated the SP3T class with three cars finishing in the top three spots ahead of the 2015 Subaru WRX STI. After the race, General team manager Tatsumi commented frankly that "We were unprepared in some areas, and this is clearly evident in the results."

With one hour to go, the WRX STI was placed 34th overall, and was able to pick up two more spots to finish32nd overall. The team had their sights set on winning their third Nurburgring 24-hour race, but this was not the year it would happen. Manager Ozawa was disappointed by the results, but said it was a valuable lesson for the future.

For the first time, STI fans were able to watch the race live on USTREAM LIVE and many fans did. The 2015 Subaru WRX STI finished a respectable 4th in the SP3T class and 32nd overall in the crash plagued Nurburgring 24-hr endurance race. Ozawa said after the race, they will learn from this year’s race and move on. “We have already set our sights for a win next year.”