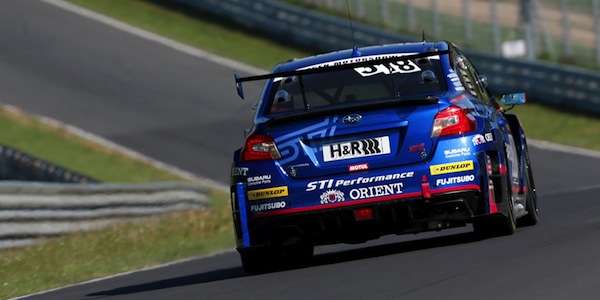 Will 2015 Subaru WRX STI NBR be ready for Nurburgring 24-hour?

The 2015 Subaru WRX STI NBR race car has taken another step in getting ready for the 2014 Nurburgring 24-hour race on June 21. This past weekend, the 2015 WRX STI NBR completed the fourth round of the VLN which took place at the famed Nurburgring.

The purpose of the testing in this round is to narrow down the setup specs on the new 2015 Subaru WRX STI that sees a full model change this year. It’s a totally new car that needs to be calibrated for the grueling race. Last time, the STI team was checking the basic performance of the race car. This time out, the team is gearing up to hopefully be ready for the 24-hour race.

The two new drivers also had a chance to drive the new Subaru performance car around the Nurburgring this weekend. Marcel Rasse is a local German driver and Carlo Van Dam and Kota Sasaki also took part in the testing. It gave these two drivers time behind the wheel to see how the car and drivers shake out. During the four hour race, a red flag suspended the race in the middle of the session for Van Dam and Sasaki. But STI says there was still progress made in the development of the WRX STI NBR.

The following day saw another crash and more delays for the STI team. The WRX STI wasn’t involved in the accidents, but lost valuable time at full-speed. But Sasaki had the best lap times and Van Dam had the opportunity to run satisfactorily at last. The final ranking during the race was number 5 but finished under the caution lap and wasn’t helpful as the team couldn’t run full out. The team felt they have solved the general issues and are ready for the full 24 hour race in June.

Tatsumi Eiji, STI general director, changed the specification settings on the WRX STI NBR from the previous VLN in April and seemed satisfied with the results. Eiji said, “Therefore, we were able to achieve the purpose of the VLN race.” There were enough full-speed lap times in this race and the team feels confident drivers and race car are prepared for the 24-hour race. Tatsumi Eiji finished by saying, "just wait for the weekend in June.”

Last month, the drivers seemed to be having trouble with speed in the corners and needed to feel more confident after this fourth VLN race. This race was the last chance to see where the car and drivers are in relation to being ready. Subaru Tecnica International’s (STI) entry in the 2014 Nurburgring 24-hour race is the 2015 Subaru WRX STI NBR. Next up is the qualifying on June 19 -20 with the start of the race on Saturday June 21. Will the STI team be ready to win?