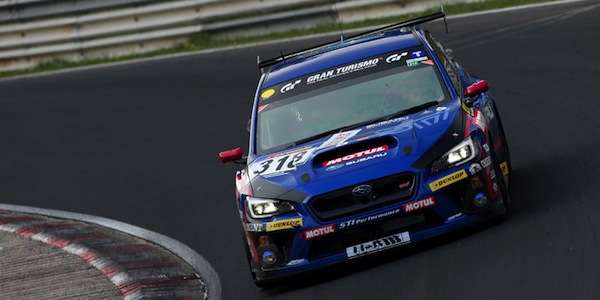 Subaru and the 2015 WRX STI Nurburgring 24-hour race car is getting ready by appearing in Round 2 of the VLN (VLN2) endurance series. But are the drivers ready?
Advertisement

Subaru Technica International (STI) needs to get the 2015 WRX STI ready for the Nurburgring 24-hour endurance race. But the drivers may need more work than the new race car. The team just completed Round 2 of the VLN (VLN2) endurance series, a 4-hour race at Nurburgring in Germany to get the new 2015 WRX STI NBR race car ready. STI planned to enter in two VNL races with the purpose of setting up their competition WRX STI for the Nurburgring 24-Hour Race (NBR) to be held in June. Are the drivers ready?

In this first preparation race, the team aimed to check the parts and modifications incorporated in the new Subaru WRX STI NBR race car. The team has participated six times in the 24-hour race, and know what it will take to win. This gives them an opportunity to compare their performance against the competitors' cars in order to go forward with their setup. They will take what they learned and make modifications before Round 4 of the VLN in May.

Toshihiro Yoshida and Marcel Lasee from Germany are the two drivers who tested the new 2015 WRX STI at Round 2 of the VLN. The team finished the qualifying in 6th out of 9 in the highly competitive SP3T class. The team was able to confirm that the new 2015 WRX STI NBR “as a whole was highly stable without losing balance when landing at the unique jumping spot on the old course.”

But in the afternoon on day two, things didn't go as planned. Yoshida started the race from 6th and moved up to 4th when there was an accident between a couple of SP3T cars, which led to the red flag being raised to suspend the race. There was 1.5-hour delay, and the race was restarted in a shortened format with only 2 hours left to go.

Marcel Lasee was scheduled to drive two stints in a row in this last half of the race, but he came back to the pit when he was running 5th on the final lap, complaining of illness. The race finished, while the Subaru WRX STI was still in the pit, which meant it didn't record any result for the race. But the goal was to determine how the car is going to perform under race conditions, and they did that.

STI General Team Manager Hideharu Tatsumi said, “It was disappointing that we couldn't finish the race, but this time, our goal wasn't that, so I'm not too worried. Our car was very stable and as fast as we'd expected. However, our competitors in the same class were faster than we had expected. In saying that, there was not such a big gap in the race, and the maximum speed of the WRX STI was comparable. We still have some room to improve our times by increasing speeds at corners, so to realize this in the next VLN race, we would like to use the coming month effectively. I came back from the race with a sense of confidence that we are in good shape”.

The new 2015 Subaru WRX STI NBR will make its next appearance on May 17 at the next VLN race. It looks like the drivers still have some work to do to get ready for the 24-hour race in June. Can they get faster in the corners? Stay tuned to Torque News for the latest 2015 WRX STI Nurburgring 24-hour race news.