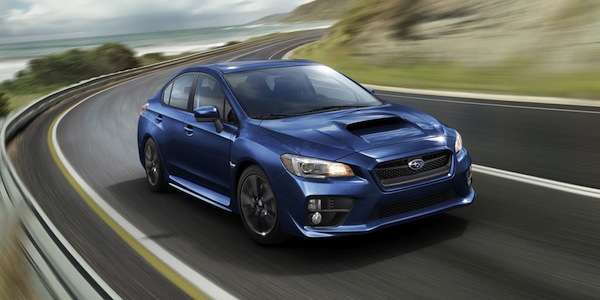 The all-new 2015 Subaru WRX comes from rally roots and this performance car delivers as advertised.
Advertisement

There are some cars that when we know they are coming for a week-long test drive, it’s easy to get excited. The 2015 Subaru WRX is one of those cars that just gets your heart pumping faster and you can’t wait to get your hands on it. This week we’re testing a WR Pearl Blue 2015 Subaru WRX Premium ($29,290) with a six-speed manual gearbox. This is the all-new fourth-generation WRX that has the underpinnings of Subaru’s rally-bred sports cars that started in the 90s.

The first WRX to arrive on U.S. shores was the 2002 model that came with a 2.0-liter turbo boxer engine that produced 227-horsepower and 217 lb. ft of torque. The 2002 WRX was the first entry into the performance car market for Subaru here in the U.S and brings back found memories for true performance enthusiasts. This new fourth-generation WRX comes with many upgrades since the 02 model was introduced, and we’re excited to see the changes for 2015.

Let’s take a look at the outside and see what changes Subaru made to the body. First of all, WRX only comes in the sedan body style for 2015 as Subaru has dropped the five-door, at least for now. Our guess is, Subaru will listen to fans and bring back the hatchback in 2017 when they free up production space on their assembly lines. What’s new on the outside?

Outside, WRX gets a completely redesigned exterior over the outgoing model. Even though fans were disappointed it didn’t look like the WRX Concept, when you see it in person, it looks better than the pics. WRX comes with a new front design with a deep front spoiler and unique grille. The hood, front fenders, rear doors and quarters, bumpers, headlights and taillights are all unique to the new-generation WRX. It’s more raked than before and it gets new narrower headlights that Subaru says were “designed to evoke a raptor’s stare.”

Inside the new WRX Premium

As soon as we stepped inside the cabin of the new WRX, we could feel that it got bigger and moved more upscale. The first thing we noticed was the new flat-bottom, leather-wrapped steering wheel that gives WRX a high-performance feel. The new wheel integrates switches for audio and Bluetooth. The roomier feel is due to a one-inch longer wheelbase than the previous WRX. Rear seat passengers gain nearly two inches of legroom and we didn’t hear any complaints from the two guys riding in the back as we were going to lunch.

The cabin feels more upscale with new soft-touch materials throughout, and new user-technologies like the 3.5-inch LCD central screen with back-up camera and carbon fiber-like trim that reminds me of the similar optional trim offered in 2002. WRX still comes with the sport front seats with wrap-around support, but comes with a new high-grip fabric that kept us planted in the seat during spirited driving this week. The front seats also come with new height-adjustable head restraints.

WRX on the road

Under the new hood, WRX comes with a new 2.0-liter turbo boxer that replaces the outgoing 2.5-liter powerplant. This new engine that was adapted from the Forester 2.0XT, produces 268 horsepower and 258 lb. ft of torque. This is a 3 hp bump from the larger H-4 2014 engine. This tester came with the new six-speed manual gearbox that replaces the five-speed in 2014. From the very first drive, we could feel the difference immediately with its wider ratio spread over the previous generation five-speed.

Over the period of a week, we took the WRX over a number of different roads in the mountains west of Denver and gave this WRX Premium a good test. The new six-speed gearbox is a joy to shift and Subaru upgraded the performance considerably with the extra gear in this new manual transmission. We took WRX up a canyon road out of Denver leading up to Evergreen with its twisty and steep hills and WRX performed better than expected. This road is as close to being on a race circuit without actually being on one.

The new gear ratios are a perfect match one through five, and six gear is great for the open road at speeds above 70 mph. We powered through the tight turns on the narrow canyon road like the car was on rails, and the combination of the new engine and the new upgraded suspension proved to be just as advertised by Subaru. It may not sound like much with a 3 hp gain, but the new 2.0-liter turbo powerplant has enough power to get you in trouble. The 268 hp is more than enough for the performance minded buyers, and it will get the average driver in serious trouble quickly.

Out on the road, we could tell the windshield is more raked than before, and this improved outward visibility which helps when you’re driving fast. We had the WRX at highway speeds in fifth gear and had lots of pedal left at 80 mph. Downshifting into six gear, this sports car will go as fast as you want to go. Too bad we didn’t have enough open road to safely test its top end capabilities. With the new tuned suspension, 235/45 R17 94W Dunlop SP Sport Maxx RT tires and the stiffer chassis, we felt confident in the WRX’s abilities at high speeds in the corners.

This performance car has the driving dynamics of much more expensive sports cars. The new Electronic Power Steering system combined with the Continuous AWD version of Symmetrical All-Wheel Drive worked flawlessly in the tight corners. The handling and balance of the WRX felt tight and more precise as we exited the corners at speeds that were 20 mph over the posted speed limit.

Where we did see an issue for WRX was in the cabin’s noise level from outside wind and road noise. The new WRX is not much different than the previous generation performance model even though Subaru says additional sound insulation has been added to WRX for the new fourth-generation model. There is still a fair amount of road and wind noise at high speeds. Another issue we had with WRX is the weak-sounding standard stereo with 6-speakers AM/FM and HD capability. We would definitely opt for the upgraded harman/kardon premium audio system that is offered for the first time in a WRX.

Where the new 2015 WRX made substantial gains is in the fuel-mileage department. EPA-estimated fuel economy with the manual transmission is 24 mpg combined and 21/28 city/highway mpg. The outgoing 2.5-liter engine with 265 hp could only muster 19/25 mpg city/highway. The new 2.0-liter direct-injection turbo (DIT) was built for driver performance and also environmental performance.

Subaru accomplished both by outfitting WRX with the Forester 2.0XT engine but it gets significant tuning upgrades. Those include stiffer valve springs and friction-reducing roller rocker arms in place of flat tappets. They are combined with direct injection, high compression (10.6:1), Subaru Dual Active Valve Control System, a twin-scroll turbocharger, and an intercooler. The new 2.0-liter turbo gets an increase of 3 hp and 14 lb-ft of torque over the previous-generation’s 2.5-liter turbo.

Another area where the new-gen WRX excels is in the area of safety. The 2015 WRX has just received the top award for good performance in each of the IIHS crashworthiness evaluations, including the small overlap front test. This is the first time IIHS has rated the WRX and WRX STI, and both came through the test with flying colors.

The 2015 Subaru WRX gets significant upgrades outside, inside and under the hood. The new fourth-generation performance car is a rally-bred sports car and offers the performance enthusiast a good dose of healthy performance at a great price ($29,290) including destination. The firmer chassis, retuned suspension, new 2.0-liter engine and new AWD system makes this WRX a more precise-handling and better performing car than the outgoing model. It absolutely devours tight, twisty mountain roads and the new six-speed manual gearbox made a world of difference. The 2015 Subaru WRX has the power and driving performance of cars nearly twice its price. It delivers on its rally heritage and stays true to its core values of exceptional handling and agility.

Jeffery L Surratt wrote on May 2, 2015 - 3:28pm Permalink
I got a great laugh out of your comment, "Too bad we didn’t have enough open road to safely test its top end capabilities." Yah, right, everyone that knows I-70, had to realize you could of went east of Denver on I-70 about 40 miles and had plenty of open highway. But that kind of driving should be performed on a closed circuit, not out on the open hwy. But it sounds like you had a blast. Are there any unpaid intern spots open, to help you test cars? I will be buying a new car in 2016, I am looking at a used $19,000 BMW 225d, with less than 60,000 miles or a new WRX.
chris wrote on May 7, 2015 - 8:24pm Permalink
I didn't realize it was a 7 speed, "downshift into 6th gear"?