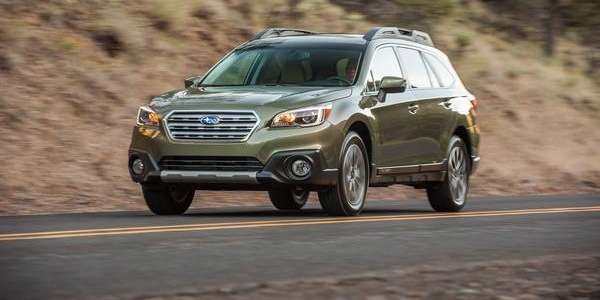 2015 Outback and Legacy feature effortless behind the wheel connectivity

The new 2015 Subaru Outback and 2015 Legacy come with the new Smart Access from Clarion. What are the benefits for consumers?
Advertisement

Imagine having an assistant ride with you in your new Subaru that you could communicate with like a friend or aide. The new-generation 2015 Subaru Outback wagon and 2015 Legacy sedan come with a new technology called

Smart Access that will keep drivers connected, but without the interruptions. The new cloud-based technology comes from a partnership between Subaru and Clarion, the aftermarket maker of this new high-tech “assistant.”

Subaru announced the debut of the Subaru STARLINK assistant, utilizing Clarion's Smart Access platform, in all 2015 model year Subaru Legacy and Outback models with more Subaru models to follow. STARLINK was co-developed by Subaru and Clarion and allows Outback and Legacy owners to communicate with their cars like the way they would to a friend or assistant asking for their input or suggestions.

What are the benefits for consumers?

It looks like a an in-dash navigation system, but this new assistant can take commands while driving and lets you dictate texts, Tweets, and Facebook posts with conversational style voice recognition. It can also offer Google powered search capabilities without interruptions while commuting to work. Would you like to have real-time, on-the-go analysis of your destination route? What if this assistant could tell you if the back tire on your new Outback wagon was low? The Subaru’s STARLINK assistant can do these things and more.

It can also allow you to input the destination address by simply stating the address in a single phrase without insisting on having you follow steps and inflexible command words. Sounds pretty sweet for a new generation of tech-savvy car buyers. Thomas J. Doll, president, Subaru of America, Inc said, "By making STARLINK standard on the all-new 2015 Subaru Legacy and Subaru Outback models, we have given Subaru drivers a highly-accessible driving companion right in their dashboards."

Customize your own entertainment

The new 2015 Outback and Legacy with STARLINK will also offer you the ability to customize your own entertainment, infotainment and productivity apps so you can have everything exactly how you want it. And the system is adaptable to use with future technology as it becomes available. Clarion says the mix of real-time services and support eclipses every other cloud-based system in the world, and the network features “always-on connectivity” to ensure that your connections will never be interrupted.

The new-generation 2015 Subaru Outback and 2015 Legacy come with the new Smart Access “assistant” from Clarion that features distraction-free operation of the system while driving. There are many benefits for consumers that will keep Subaru drivers connected, but without the interruptions. It’s the right idea for a new generation of millennial consumers. Subaru says more models will feature the new STARLINK in the future.

neil wrote on August 8, 2014 - 3:50pm Permalink
Just what we need - another way to distract the driver from focusing on driving. This is a prime reason why autonomous cars need to be released. And no, I wouldn't but any of features because I want to actually pay attention to the multi ton machine I'm piloting.