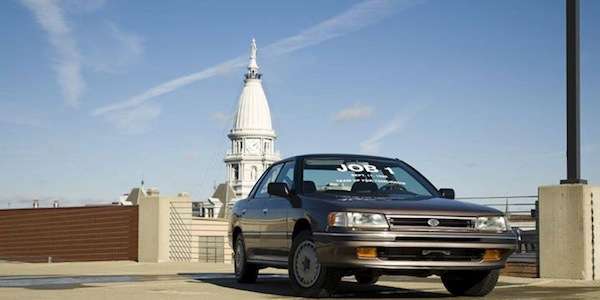 The new-generation 2015 Subaru Legacy celebrates 25 years of production. What happened that was really strange at the celebration?
Advertisement

The 25th anniversary of the Subaru Legacy being built at the Indiana plant passed with such little fanfare, that the Subaru of Indiana Automotive (SIA) didn’t even put out a press release. The all-new 2015 Subaru Legacy sedan has been produced at the Indiana plant for 25 years on September 11. But at the celebration on September 10, there was very little fanfare to mark the significant occasion.

SIA and its 3,898 associates observed the 25th anniversary of the first vehicles produced at the automaker's Lafayette plant. The day passed as it did on Sept. 11, 1989, when two vehicles, a beige Subaru Legacy sedan and a bright red Isuzu light truck, rolled off the production line without public celebration. You would think Subaru would have made a big deal of the occasion. But it passed with very little fanfare.

In a story from the Lafayette Journal & Courier, Tom Easterday, SIA executive vice president said, SIA associates built 919 Subaru vehicles on August 25, the plant's highest single day output. The plant is projected to manufacture 262,053 vehicles in 2014 compared to the 4,087 made in 1989. Subaru has been producing Toyota Camrys at the plant since 2007, and will stop next year and will begin to produce Subaru Imprezas.

Legacy gets full redesign for 2015

The Subaru flagship’s sales have been lagging in recent years, and the new 25th anniversary Legacy’s remodel will help it compete with others in the class. Legacy has been completely re-designed for 2015 with new exterior styling, new interior refinement and enhanced safety technology. The 2015 model also offers the largest cabin space in the midsize segment. A big plus will be its higher fuel efficiency and new standard Active Torque Vectoring for greater agility in the corners.

When asked by the Lafayette Journal & Courier what the next 25 years hold for the plant, Easterday said, "For the next five to 10 years SIA is certainly going to see continue growth. Because of Subaru's reputation for quality, reliability and safety, as a brand, we will continue to grow.”

Over 2.5 million Legacys have been produced

The first Subaru Legacy sedan rolled off the line in September 1989, and over 2.5 million of the flagship models have been produced over those 25 years. It should have been a big celebration as the new 2015 Subaru Legacy makes its launch here in the U.S. Maybe SIA wanted to keep the production line moving because Subaru of America just announced a revision of their sales forecast from 460,000 to 500,000 vehicles this year. The Subaru plant is humming at a record pace.