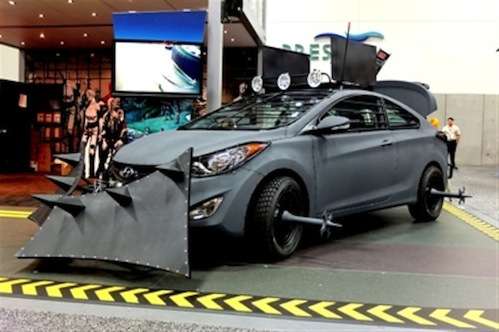 The zombie killing Hyundai Elantra Coupe received some very important modifications from Design Craft. The updates include a front-end custom zombie plow with spikes, armored window coverings, a roof hatch to allow passengers to fend off attacking walkers, a trunk full of electric and pneumatic weaponry, front and back end floodlights, spiked all-terrain/rally type tires, and a CB radio system.

Design Craft Fabrication who build the car for Hyundai is a top builder of race cars, drift cars and display vehicles. “Our custom Elantra Coupe Zombie Survival Machine is the ultimate car for The Walking Dead fans and anyone who wants to survive a zombie invasion,” said Steve Shannon, vice president of Marketing, Hyundai Motor America. “We are excited for fans to come and experience the Elantra Coupe and GT in a unique, post-apocalyptic way.”

The Hyundai Undead program celebrates the release of the 100th issue of The Walking Dead comic. Robert Kirkman’s wildly popular award-winning comic and novels along with the Hyundai Zombie Survival Machine seems to be a big hit already at the Comic-Con event. “Working with Hyundai on this Zombie Survival Machine was a total blast and I am excited to share this stunning vehicle with all the fans,” said Kirkman.

Attendees of Comic-Con will get the chance to sit inside the Zombie Survival Machine at the Future US booth and take pictures of the unique car. Fans can check out all the features on the car that also comes with its own limited run illustrated owner’s manual that walks drivers through the machine’s unique features and prepares them for the gruesome realities of the zombie apocalypse. The Future US booth will also feature a Zombie Target practice area and a zombie costume contest.

For even more information on the car, fans can view a series of behind-the-scenes videos that detail the creation of the Zombie Survival Machine and showcase the car build from start to finish at HyundaiUndead.com and on Skybound.com