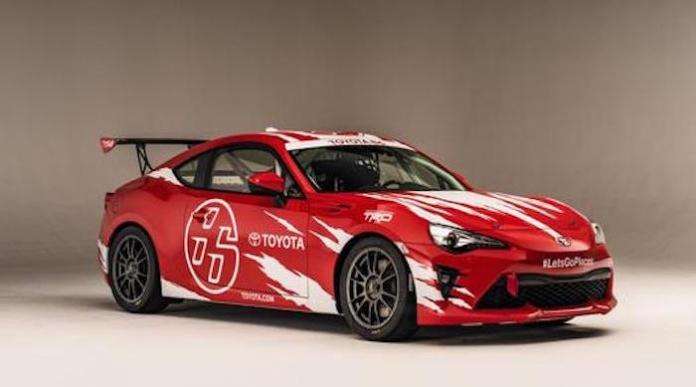 How will a relatively stock 2017 Toyota 86 sports coupe do in a competitive race series? Toyota Motorsport’s GmbH (TMG) is getting ready to find out. A TMG-Enhanced Toyota 86 makes its North American debut in the Pirelli World Challenge (PWC) racing series at Utah Motorsports Campus in Tooele, Utah, August 11-13.

The Toyota 86 will be entered in the TCA class, and will do battle in the PWC’s double-header race weekend. The 86 is scheduled to compete only in the two Utah PWC events, taking place outside Salt Lake City. The TMG 86 sports coupe is a production Toyota 86 prepared by TMG for racing competition.

The TMG 86 Cup Car features a relatively stock 2.0-liter Subaru boxer engine with some minor tuning, a 6-speed manual gearbox, as well as TMG upgrades to the vehicle’s suspension, brakes and engine tuning, among other changes that include safety equipment for racing.

Toyota made the decision to enter the TMG 86 Cup Car in PWC after success of another 86 two-door coupe. A stock 86 with TRD parts and accessories beat the entire field at the local Spring Fling Autocross event in Southern California in March. They see this as another opportunity to showcase the 86’s sports car prowess.

Toyota has a storied motorsports past and the current 86 sees a return to the long racing heritage. When the Corolla AE86 was launched in the United States in the 1980s, it earned a strong enthusiast following, while the car was simultaneously building a cult following in Japan as a drift vehicle. Toyota says, “The 86 pays homage to the legendary car of the past, while proving itself to be an athletic force today. Our Toyota 86 is a potent car right out of the box, but it gets even hotter with a full lineup of TRD parts and accessories.”

Fans can watch the TMG-enhanced 2017 Toyota 86 race live in person or via Motor Trend on Demand. The PWC races will also be taped for broadcast on CBS Sports Network on August 23 at 8:00 p.m. EST. Keith Dahl, motorsports general manager for Toyota Motor North America (TMNA) says, “The Toyota 86 is ready to go and we hope to turn some heads in Utah.” Stay tuned.