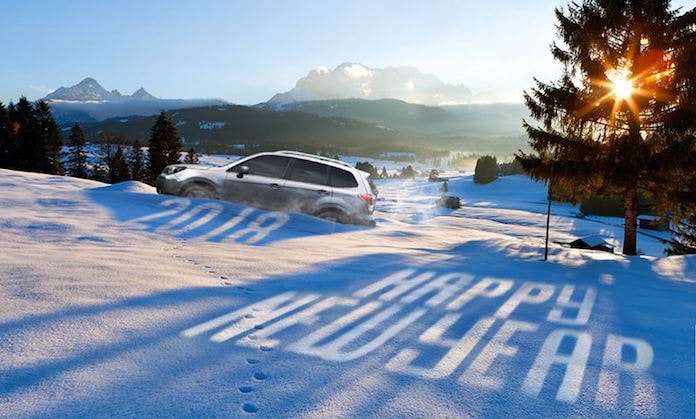 2018 will be a big year for Subaru. Here’s what’s coming for consumers.
Advertisement

Subaru of America has a big year planned for 2018. Consumers will get two new vehicles and eleven limited edition and 50th anniversary models. It starts next month when they were founded 50 years ago on February 15, 1968. Subaru announcement every model in the Subaru lineup they sell in the U.S. will get its own 50th Anniversary Limited Edition trim.

Consumers will see a new commemorative 50th anniversary 2018 Outback, Forester, Crosstrek, Impreza, Legacy, WRX, WRX STI and BRZ. These models will feature the new special edition Heritage Blue color and each will be based on their top trim with special badging. Inside, each model will feature black leather upholstery, silver stitching, silver seat belts, and special embroidered logos.

Each model (except WRX/STI and BRZ) in the lineup will be limited to 1050 examples. 2018 Subaru WRX, WRX STI and BRZ sport coupe will get 1050 total examples for the performance line. WRX will get 600 Limited trims, WRX STI Limited will see only 200 examples produced and BRZ will get 250 Limited models in the special 50th anniversary trim. Subaru has not announced pricing, and more details are coming at the Chicago Auto Show running February 10-19, 2018.

Type RA runs the 2.5-liter EJ25 turbo boxer engine and it's getting some STI modifications that will bump up the power to 310hp. The torque stays the same at 290 lb. ft. Subaru Tecnica International (STI) worked in some new EJ25 engine mods using an STI-specified new cold air intake and high flow performance exhaust. A retuned ECU and stronger pistons also contribute to the increased engine performance. The six-speed gearbox also gets re-tuned with a revised 3rd gear ratio mated to a short throw shifter. Pricing starts at $48,995 and they make their dealer launch early 2018.

For the first time, BRZ tS is equipped with 18-inch lightweight STI wheels wrapped in 215/40 R 18 Michelin Pilot Sport 4 rubber for superior grip and quicker turn-in. Brembo brakes at all four corners round-out the package. BRZ tS is available in Crystal Black, Crystal White, and WR Blue. Pricing starts at $33,495 and they will be available early 2018.

Subaru brings their biggest vehicle they’ve ever produced to the U.S. market early summer, 2018. The all-new 2019 Subaru Ascent 3-Row will be built in the U.S. for North American families. Ascent rides on the new Global Platform and it’s powered by a new 2.4-liter twin-scroll turbocharged four-cylinder boxer engine producing 260hp and 277 lb. ft of torque. The Ascent will come in four trims, Ascent standard, Premium, Limited and top-of-the-line Touring.

Features will include standard EyeSight driver assist technology, standard X-Mode and 8.7 inches of ground clearance, and the Ascent comes with 5000 lb. towing capacity. It will come with 72.6 cubic feet of cargo carrying ability, 4G LTE Wi-Fi, 8 available USB ports, heated and ventilated front seats, rear-seat climate control and 2nd and 3rd row sunshades. The all-new 2019 Subaru Ascent base model will start in the low $30,000 price range with all trims coming in early summer 2018.

2018 will be a big year for Subaru. Consumers will get two new vehicles with the 2019 Subaru Ascent, all-new fifth-generation 2019 Subaru Forester, and eleven limited edition and 50th anniversary models. Stay tuned.

Ed B wrote on January 4, 2018 - 12:19pm Permalink
I'll be at the Philly Auto Show checking out the Ascent. However, I'll probably stick with my Forester XT and wait for the new Forester in the Fall. I don't anticipate any bold design changes, my main concern is they keep the turbo engine option. I'd love to see the new Ascent turbo in the "Sport" Forester or whatever they call the XT moving forward. Hopefully many of the interior changes from the Ascent will go into the new Forester.
Brian Ochs wrote on January 29, 2018 - 9:32pm Permalink
Looking forward to see what the new Forester will offer, hopefully will have a new body and get away from the boxy look like Ford did with the Ford Excape if they do may be my next purchase, we'll see