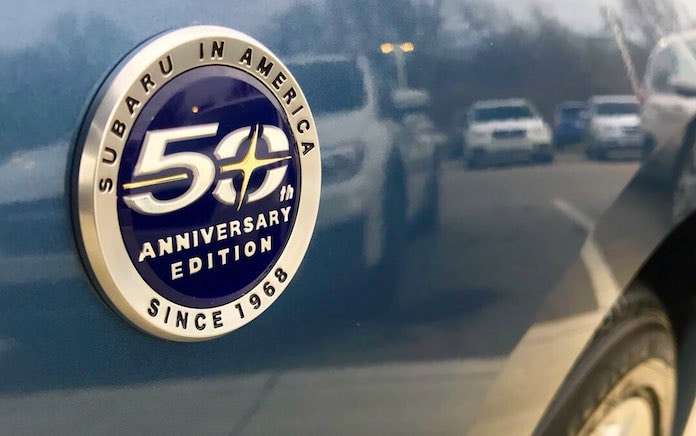 Wagner Subaru in Fairborn, Ohio on their Twitter page, just tweeted out the new 50th Anniversary models are arriving now. Torque News reported the new color would be Heritage Blue, and you can see the new color on the image above with the 50th anniversary logo on the front fender.

We’ve also heard along with the commemorative "Subaru 50th Anniversary" badge in the image above with a silver ring, gold star placed on the front fender of each model, they’ll also get special wheel finishes. Inside, each model will feature black leather upholstery, silver stitching, silver seat belts, and special embroidered logos.

We are guessing the first models arriving now are the 2018 Subaru Outback, Impreza and Legacy models which are made at the Subaru Indiana Automotive plant in Lafayette, Indiana. The other models, WRX, WRX STI, BRZ, Forester and Crosstrek will be shipped from Japan and could be arriving later.

Each model in the Subaru lineup will have an anniversary model in the Limited trim except Forester coming in the top Touring trim. Each model (except WRX/STI and BRZ) in the lineup will be limited to 1050 examples. 2018 Subaru WRX, WRX STI and BRZ sport coupe will get 1050 total examples for the performance line. WRX will get 600 Limited trims, WRX STI Limited will see only 200 examples produced and BRZ will get 250 Limited models in the special 50th anniversary trim.

If you think this article would interest your friends, consider sharing or tweeting it to your followers.