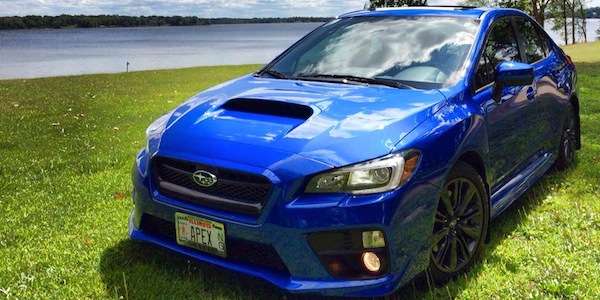 The all-new 2015 Subaru WRX STI is a hot commodity at Subaru dealers across the nation. Can you find one?
Advertisement

The new 2015 Subaru WRX and WRX STI only trail the top-selling Subaru Forester in percentage of sales increase for 2014. The performance cars are flying out of dealer showrooms faster than they can get them in. We reported earlier this month that 2015 WRX and WRX STI performance sedans are hard to get and the wait is long if you want one.

Subaru of America (SOA) has reported July sales and 2014 YTD sales and the 2015 WRX and STI are smokin’ hot cars in the area of performance and sales. SOA reports that the WRX and STI models have seen a 38.24 percent YTD sales increase over the previous years sales and that makes the performance car the top percentage of sales leader in the lineup and only the new 2015 Forester is better at a 46.77 percent increase YTD. The WRX and WRX are even ahead of the popular XV Crosstrek with a 35.80 percent increase YTD.

Many dealers are seeing demand for the 2015 WRX is about the same for the WRX STI and they are selling an equal number of sales of each model. So if you want a new 2015 WRX or WRX STI be prepared to put your name on a waiting list. We are hearing there’s a 3-4 month wait to have your performance car made and shipped from Japan. We also hear that as of two weeks ago, there were only 75 of the new 2015 WRX STI Launch Edition models left in the U.S. for sale.

The limited edition models come equipped with gold-finished forged alloy wheels and the WR Blue Pearl exterior paint that is a combination long associated with Subaru competition rally cars. Only 1000 of the special edition cars are being produced for the U.S. market and you need to hurry if you want one. If you want a chance to win a free 2015 WRX STI Launch Edition you have until August 4 to enter from eBay Motors. Fans can visit http://bit.ly/1ods794 to find out how to enter.

Subaru is not done attacking the market in 2014 as the new-generation 2015 Legacy sedan and 2015 Outback wagon made their dealer launch in July. The reason the new 2015 WRX/STI performance sedans are flying out of dealer showrooms, is because performance fans like the upgrades that have been made to the new-generation 2015 WRX/STI styling, drivetrains, technology, comfort and luxury upgrades.

Subaru is reporting an all-time monthly sales record for July and the 2015 Subaru WRX and WRX STI are smokin’ hot and contributing to Subaru’s success this year. Performance fans will have to wait in line if you want one.