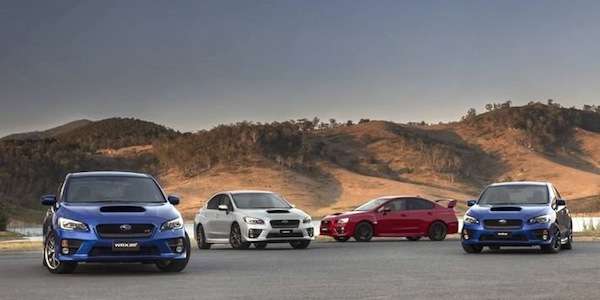 The 2015 Subaru WRX and WRX STI sales are hot as the new performance sedans have been launched here in the U.S.
Advertisement

Subaru of America (SOA) is flying high and the 2015 Subaru WRX STI is performing extremely well on the road and in sales. The new-generation WRX/STI sedans are flying out of dealer showrooms and the fact that Subaru dropped the five-door hatch doesn’t seem to be hurting sales of the flagship performance model. Subaru of America is reporting that the 2015 WRX and WRX STI have passed the popular XV Crosstrek in percentage of sales and is just behind the 2015 Forester.

And Subaru as a brand is ahead of projected sales for the year, and SOA is reporting a best-ever June sales with 41,367 vehicle sales for June 2014, a 5 percent increase over the same month in 2013. This year, Subaru has sold 238,008 vehicles, a 16.3 percent increase over the same period in 2013. This is an amazing 31 consecutive months of year-over-year growth for the Japanese automaker. And Subaru should hit their sixth successive annual sales record in 2014.

In percentage of sales increase, the performance cars, 2015 WRX and WRX STI are not far behind the 2015 Forester. Year-to-date, the 2015 Forester SUV increased sales 46.6 percent over the same period in 2013. The new-generation 2015 WRX and STI performance models are performing extremely well, with sales up 38.5 percent year-over-year. The popular XV Crosstrek crossover is next with 34.6 percent increase.

More new models on the way

Subaru is not done attacking the market in 2014. The new Generation 2015 Legacy sedan and 2015 Outback wagon are set to make their dealer launch later this month. Thomas J. Doll, president and chief operating officer, Subaru of America, Inc. said, “We have strong, positive energy around our brand as the new Legacy sedan and Outback enter retailer showrooms this month, we expect that momentum to continue.”

The 2015 Subaru WRX sedan and Subaru flagship 2015 WRX STI are flying out of dealer showrooms as performance fans are buying the sedans at a record pace. The fact that Subaru decided to drop the five-door hatchback isn’t hurting sales of these models. The reason the new WRX/STI is flying out of dealer showrooms, is because performance fans like the upgrades that have been made to the new-generation 2015 WRX/STI styling, drivetrains, technology, comfort and luxury upgrades.

Carl wrote on July 2, 2014 - 1:10pm Permalink
You're pretty much right, Dennis. We thought it would hurt that there wasn't a hatchback. And to a certain extent, it has. But the thing is - Subaru has done so much RIGHT with this car that they're just not staying in dealerships for long, if they even make it there to be sold in the first place. And what I mean by that is pre-orders numbers for these cars seem to be incredible. We've a local dealership that has sold orders pending out until November now, simply because of the demand.
Oleg wrote on July 2, 2014 - 5:34pm Permalink
They got me wanting to switch from 3.8 ltr Eclipse because of SVT (not a manual driver) 260 horses and AWD. That's the only car I would buy now. Something with punch for me and sedan my wife can drive.