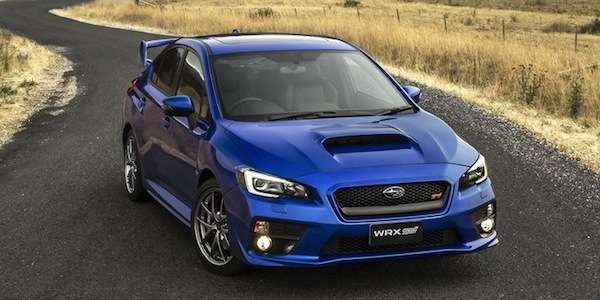 How is Subaru’s decision to drop hatch from 2015 WRX/STI lineup affecting sales?

Subaru reports the WRX/STI performance cars are helping set another record sales in May. How is Subaru's decision to drop hatchback affecting sales?
Advertisement

Subaru just keeps setting records month after month and the new-generation 2015 WRX/STI is helping. We knew the 2015 Forester and new XV Crosstrek would be leading in sales as they have for month’s now. But the all-new 2015 WRX and WRX STI sedans are selling in record numbers and helping Subaru achieve record numbers in May. Subaru of America has now seen 30 consecutive months of year-over-year growth and is well on its way to its sixth successive annual sales record.

What’s going on with the new WRX/STI performance models?

Performance fans are snatching them up at a record pace. Subaru reports sales are up 42.18 percent year to date and a whopping 61.67 percent increase over last month’s sales. Fans are responding to the new WRX/STI performance models and buying them as fast as they arrive. WRX and STI received a complete update for the 2015 model year. They are all-new with updated styling inside and out and WRX gets a new 2.0-liter turbo engine. Both received significant upgrades to the chassis. But Subaru decided to drop the 5-door hatchback.

Subaru didn’t offer the 5-door hatchback model for 2015 , but it doesn’t seem to be affecting sales of the performance flagship STI. Fans have been upset that Subaru has “temporarily” suspended production of the hatch model in WRX and WRX STI. But sales around the globe indicate that fans are happy with the new-generation sedan sports cars.

Whats going on with the rest of the lineup?

Thomas J. Doll, president and chief operating officer, Subaru of America, Inc. “With very positive press reaction to the all-new Legacy and Outback models we expect even stronger demand as we enter the summer months and we remain on track for another record year.”

Can Subaru keep up with WRX/STI demand?

H. William Cyphers, senior vice president of sales says, “We are having another great year. Every model line is in demand and our challenge is to keep supply levels high enough to keep the customers coming in our showrooms satisfied.”

It looks like even though Subaru dropped the 5- door hatchback from the 2015 WRX and WRX STI lineup, buyers are snatching up the new performance sedans in big numbers. The decision by Subaru doesn’t seem to affecting sales in a negative way. The WRX/STI hatch will likely be back as soon as Subaru can ramp up production capabilities to keep up with growing demand for all their cars. Stay tuned to Torque News for the latest WRX/STI news.