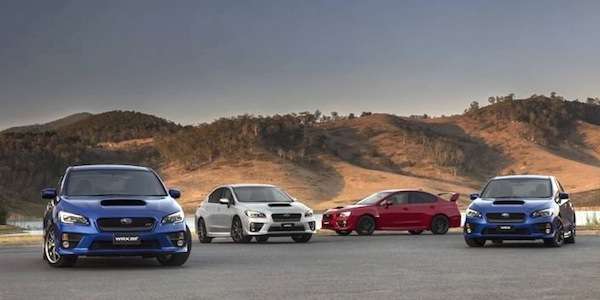 Will we ever see a Subaru WRX/STI 5-door hatch again?

Will we ever see a 5-door hatch in the performance 2015 Subaru WRX or WRX STI again? Subaru listens to their loyal fans. Here is a way to let them know.
Advertisement

There are multiple reports out there that say Subaru won’t be bringing back the 5-door hatch in the WRX or WRX STI. But Subaru has told this writer that Subaru won’t be offering the hatchback in the 2015 model year because they wanted to focus on the differentiation between the WRX/STI and the Subaru Impreza model line. This would make sense as Subaru has been wanting to separate the performance WRX/STI from the Impreza and dropped the Impreza name from the sports car.

John Mergen, Subaru of America, Inc., Customer/Dealer Services Department, told me, “We wanted to focus on that differentiation and so we put our resources into a single 2015 WRX Sedan model.” And those resources are limited for Subaru due to multiple new launches this year. Subaru not only brought out the new-generation Subaru WRX and WRX STI, but they will also launched the 2015 Subaru Legacy sedan and the new 2015 Subaru Outback wagon here in the U.S. And Subaru is launching the new-gen 2015 Legacy in a wagon variant in Japan. They will also launch a new LEVORG sports tourer in the Japan market this year.

Subaru is growing faster than any other automaker in the world in terms of percentage of sales. In order to keep their largest market, the U.,S., supplied with their multi-use vehicles, they have to cut production and resources somewhere. The Japanese automaker had to make some decisions in order to keep up with demand here in the U.S. Subaru chose to cut the 5-door WRX/STI because they can’t launch all these new models and built a 5-door WRX/STI.

While it doesn’t make performance fans happy, Subaru is listening to their loyal customers and will likely make the change when they can free up production space on their assembly lines. Subaru is increasing production at their Indiana plant here in the U.S. Subaru will be investing $407.5 million to increase the plant's annual capacity to 370,000 cars by 2016. Subaru expects to sell 400,000 cars globally by the end of 2013. The U.S. along with strong sales in Canada is forcing Subaru to make room for more cars to be produced here in the U.S.

Subaru does listen to their loyal customers and will respond if they send a clear message that they want a WRX/STI 5-door hatch. Subaru documents every one of your responses in a Customer/Dealer Services database. If you want a WRX/STI 5-door hatchback, you can send your response to John Mergen, Subaru of America, Inc. at the Customer/Dealer Services Department. You can call 1-800-SUBARU3 (1-800-782-2783) or email at [email protected]

John Mergen said, “Subaru is always striving to improve upon our products and appreciates when our customers bring their product interests to our attention.” By responding with your request, this will allow for your message to be properly reviewed, tracked and considered by Subaru’s Product Management Department. So if you want to see a Subaru WRX/STI 5-door hatch, let Subaru know.

eric dedicatoria wrote on April 28, 2014 - 5:53am Permalink
i like the looks abd utulity of the hatchback. i have a 2011 impreza hb and ready to replace it with the new wrx...only in the hatchback configuration. i'll buy one if subaru makes it soon enough.
Carl wrote on April 28, 2014 - 1:34pm Permalink
When SIA has production open up with stopping production of the Camry so they can shift XV production to here - which will open up production capability in Japan - we'll see a 5 door again. Probably 2 - 3 years is the best estimate on that.
Brad wrote on June 9, 2014 - 8:22pm Permalink
Maybe it's just me but I saw a Subaru sti hatchback a few days ago...
Reswan wrote on June 29, 2014 - 1:29pm Permalink
i want a ford focus platform of 2015 sti hatch
Tim wrote on April 3, 2015 - 7:32pm Permalink
I'm a die-hard Subie fan and would love to see a new hatch model STI release
Jeff wrote on June 20, 2015 - 10:54am Permalink
We are ready to buy a new 5 door wrx, but see you are not making them anymore. Really hate the thought of going over to Ford Focus RT 5 door in 2016. Have been a loyal buyer of Subaro for many years. Please bring it back! Great for skiers, snowboarders, mtn bikers, etc.
Sam wrote on June 28, 2015 - 3:23pm Permalink
Currently wishing and waiting on the new Subaru WRX STI hatchback model.. If Subaru ever does decide to come out with another hatchback, I won't miss a day to buy it! I am outdoor lover and love outdoor activities such as skiing, kayaking, mountain biking ect. and the hatchback perfectly fit my lifestyle. Even though the sales on the hatchback were not as high as the sedan in the past there is still a significant population like me that needs a versatile car to assist them with their activities. In turn, the release of a brand new hatchback model will undoubtedly increase Subaru's customer satisfaction reputation. I hope to see Subaru come to this realization.
traddcliff wrote on September 19, 2015 - 2:11pm Permalink
well i guess i won't be buying a Subaru anymore. WRX/STi hatch is my car...and a bunch of people i know. very sad.
tommy Raddcliff wrote on July 9, 2016 - 1:34pm Permalink
BIG mistake. 5 door WRX/STi was the greatest car on the planet. Subaru has failed us.