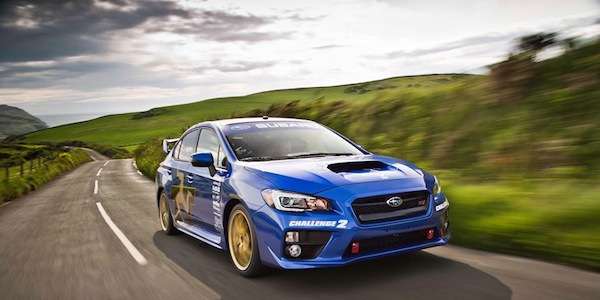 Subaru just released a video of the full lap of the 2015 Subaru WRX STI Isle of Man record run. Mark Higgins who drove the new-generation WRX STI narrated the 22:23 minute video as dash cam records the record run earlier this month. The video is at full-speed and it shows just how scary fast he went to brake his own record from 2011.

Higgins drove a U.S. spec 2015 Subaru WRX STI broke his lap record of the fabled 37-mile course with an average lap speed of 117.510 and a time of 19 minutes and 15 seconds. In Higgins’ record lap, the Manx native said several errors caused him to lose time and he was determined to get more out of new-generation STI.

Higgins tries again after he broke the record

After he set the record, Higgins said, “I think there is definitely time that we left on the course. I lost time on the second part of the track, overshooting my braking point at Sign Post corner. I actually hand-braked the turn in the end, so I feel we can definitely do better.”

Higgins was able to get even more out of the new 2015 STI. He said after the last run, “This was a great run when everything came together and I was able to do a much cleaner lap as I am still learning where I can go flat in this car. I am really happy to beat the lap records set by John McGuiness in the Zero Bikes and the sidecar lap record as John was riding me about that! I can’t say enough about the new WRX STI and how much abuse it has taken as we have really ridden it hard over this course for three very fast runs and this is definitely not an easy course. The chassis on this new car is just night and day.”

The biggest differences are in the steering and chassis updates for the 2015 model. This made all the difference as Higgins blew away the old lap record he set 3 years ago. Handling has been enhanced with firmer springs and quicker steering response (13.3:1 ratio) for improved control. Higgins could feel the difference as he flew around the 37-mile Isle of Man TT road course.

Also new for this years record run was Mark Higgins had a body monitor strapped around him to monitor heart rate in beats per minute, breathing rate in breaths per minute, body temperature, and also the G-force on his body. He was surprised at the results after the race. His heart rate was slow until he began the record run, and then his body matched the cars acceleration.

Like the 2010 WRX STI performance car that he drove in 2011,The only upgrades made to the stock U.S.-spec 2015 WRX STI, were a FIA-spec roll-cage, racing seat and harness, fire suppression system and modified springs and dampers to handle the sustained high speeds and changing conditions of the course. The 2015 WRX STI was shod with Dunlop Derezza tires and received a high decibel straight exhaust for crowd safety. The speed limiter was also removed from the car.

Listen to Mark Higgins as he explains exactly what he was experiencing driving the 2015 Subaru WRX STI during the full record run at IOM.