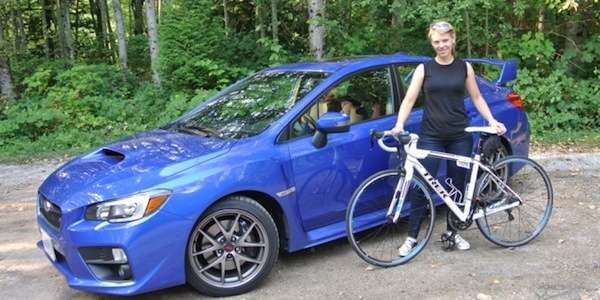 Is the new Subaru WRX STI too hot for female drivers?

The 2015 Subaru WRX STI is purchased by guys who want a performance car with exceptional driving dynamics. Is it too hot for female drivers?
Advertisement

When Fuji Heavy Industries and Subaru Tecnica International developed the new-generation 2015 WRX STI, they had the 25-45 year old male in mind. And there are older males who are still young at heart who will buy the new performance sedan and have more fun than their friends who are watching life go by. But there aren’t many females who will buy the WRX STI, but will likely choose the milder 2015 WRX instead. Is the new STI too hot for female drivers?

There a few female drivers who want the explosive power and superior driving dynamics of the WRX STI. But it’s definitely the exception and not the rule. It takes a special person who can appreciate the STI’s performance capabilities and be able to exploit the cars athletic personality.

Subaru is a sponsor of Canadian IronMan series

Maybe that’s why a female triathlete like Alexandra Straub would be attracted to a car like the new WRX STI performance sedan. She just recently completed a sprint triathlon at the IronGirl series in Canada just a few hours from her home in Seattle. Subaru is a major sponsor of the Canadian IronMan series, and Alexandra says, “so it only seemed fitting to take my WRX STI with me to my first event, right?” She owns a new WR Blue Pearl 2015 WRX STI and it was chance for her to spend some “quality time” with her new performance sedan.

The sprint distance for the IronGirl event is less than the IronMan triathlon, but it’s still a grueling event with a 1/3-mile swim (500m), a 12-mile (20km) bike ride and then a 3-mile (5km) run. It’s sounds similar to the decades of global Rally racing that helped develop the STI into the rally-bred performance car it is today.

She uses the STI to get ready for the race

Alexandra didn’t purchase the optional roof rack for her new STI, so she loaded the bike in the trunk but had to take the front wheel off so it would fit. She explains that on her journey north to the IronGirl event, she was using the STI to get her ready for the race. She said, “The times when I pressed the accelerator a little quicker to the floor made me think about how I'd sprint my last few hundred meters across the finish line. When coasting at highway speeds, I'd think of myself cruising on the bike portion, but not too hard so I wouldn't exhaust myself for the run.”

DONT MISS: How Subaru used Finland and Germany to develop the STI

The 2015 Subaru WRX STI is bred to run hard through the challenging rally courses and extreme conditions it encounters around the globe. Alexandra says if her STI “didn't waver in the face of adversity, neither would I. On race morning, it was still dark when I got to the car (think 4:30 a.m. dark!) As I pushed the start button, the conviction and grumble from the STI's exhaust invigorated me.”

She loves her WRX STI

She completed the IronGirl event that day but was left completely exhausted. She could barely walk after she crossed the finish line. But she smiled because she knew she had reached her goal, and that her WR Blue Pearl performance friend was waiting to take her back home.

There may not be a lot of female drivers who purchase a new-generation 2015 Subaru WRX STI performance sports car, but there are a few women who would choose the STI over a boring family grocery hauler. This female triathlete proves the new STI isn’t just for males.

GargantulaKon wrote on November 23, 2014 - 2:16pm Permalink
That's my kind of woman! If would be great if men could buy Volkswagen Beetle's without feeling less like a man and females could buy Subaru WRX STI's without feeling less like a woman.
Sarah wrote on December 10, 2014 - 2:27pm Permalink
It's this kind of outdated sexism that turns me off to "publications" like torquenews.com.
Lisa DeSchryver wrote on September 28, 2018 - 1:49pm Permalink
I have a 2015 Subaru STI Limited and I love it! It makes me feel alive! I am a 66 year old mother of 3 and have always had a need for speed. I prefer 60's era stock muscle cars but since living in the Sierra Nevada mountains I have owned at least 10 Subarus. I figgured why not get a fast fun all wheel drive I could enjoy.