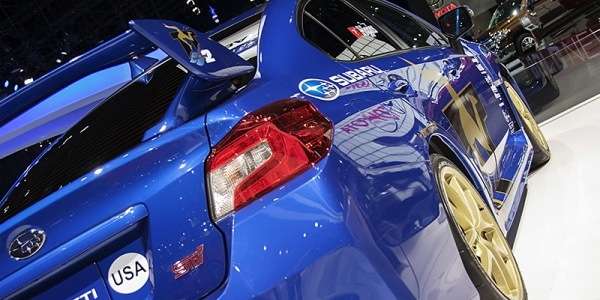 Subaru brought a very special 2015 WRX STI to the LA Auto Show. Do you remember what Mark Higgins did in this iconic STI?
Advertisement

The 2015 Subaru WRX STI that shattered the Isle of Man record in June is on display at the Los Angeles Auto Show 2014. Last year, Subaru unveiled the all-new 2015 WRX as it made its global debut at this same show. It’s been quit a year for the performance cars from the Japanese automaker. The new STI smoked the old record held by the previous generation 2010 WRX STI which was also driven by Mark Higgins.

Subaru and STI made significant upgrades to the new-generation model

Subaru wanted to show that they had made significant upgrades to the new 2015 WRX STI and the performance car delivered in a big way at the Isle of Man. Higgins broke his old record of 115.36 that was set three years ago by hitting an average lap speed of 116.470 and a time of 19.26.

Higgins was confident he could break his own record

Higgins knew the new-generation U.S. spec 2015 Subaru WRX STI received upgrades that would make it faster around the 37-mile Isle of Man TT Road Course. Subaru’s global performance flagship model was upgraded with a stiffer chassis for improved performance in the corners. Handling was enhanced with firmer springs and quicker steering response (13.3:1 ratio) for improved control.

MUST SEE:
5 Reasons you don’t want to buy the WRX but should chose the STI

Like the 2010 WRX STI performance car that he drove in 2011, The only upgrades made to the stock U.S.-spec 2015 WRX STI, are a FIA-spec roll-cage, racing seat and harness, fire suppression system and modified springs and dampers to handle the sustained high speeds and changing conditions of the course. The 2015 STI is shod with Dunlop Derezza tires and has a high decibel straight exhaust for crowd safety. The speed limiter was also removed from the car.

Last year at the Los Angeles Auto Show it was the 2015 Subaru WRX that was making its global debut. This year, Subaru brings the iconic 2015 WRX STI that set a new lap record at the fabled Isle of Man TT road course in June. The record-setting performance car will likely end up on display at their Ebisu Subaru Building, it’s new corporate headquarters in Tokyo.