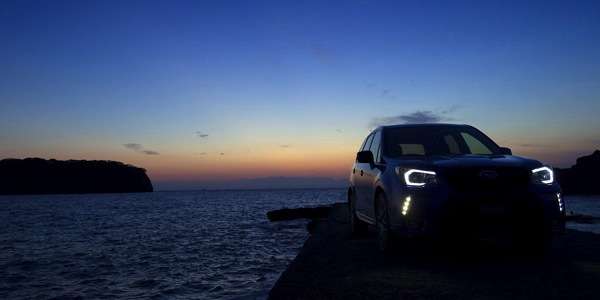 Subaru will introduce the new 2015 Forester STI soon. Will we see it here in the U.S.?
Advertisement

Fuji Heavy Industries (FHI) and Subaru Tecnica International (STI) says a new 2015 Subaru Forester STI will be revealed on November 25, 2014. Subaru brought the 2015 Forester tS Concept to the Japan Motorsport Festival 2014 and displayed the performance SUV at their booth, but we didn’t know if it was going to reach production. It looks like Subaru is going to launch the new performance Forester STI sometime next year.

Here's what we know about the new Forester STI. FHI and STI have collaborated on this new performance SUV and it will definitely get more than a few STI badges and treatments on the outside and inside. This has been what we’ve seen in the past from Subaru and STI. They tease buyers with a special edition model with STI badges on the outside, and a few STI enhancements in the cabin, but no meat underneath for performance enthusiasts.

Subaru and STI developed the new Forester STI at the same time they were testing the new 2015 Subaru WRX STI Nurburgring 24-hour race car. They also have tested the performance SUV on twisty roads in Europe and the autobahn to make sure this new Forester STI will hold up under normal driving conditions. They then tested the Forester on the Nurburgring 24-hour track under more severe conditions.

What drivetrain will Forester get?

Subaru has not released exact details on the powertrain of the new Forester STI, but we can guess it will get the same 2.0-liter turbocharged engine that comes in the new 2015 WRX S4. The new S4 is equipped with a high performance 2.0-liter direct injection turbo "DIT" boxer engine. The new engine was perfected in Subaru’s motorsport involvement and produces 221 kW (296 hp) and 400 Nm (295 lb ft of torque). Subaru has been perfecting the new 2.0-liter powerplant in the 2015 WRX STI Nurburgring 24-hour race car this year. The testing was done by the Subaru Tecnica International's (STI) race team. Subaru says it will achieve 31 mpg in the JC08 mode Japanese cycle test.

The new Forester STI will also come with a new suspension developed by STI. The steering and suspension will be all-new for this new performance Forester. STI says they developed a new flexible support sub-frame in the rear that provides superior handling while providing a comfortable ride. They perfected this on the track and roads in order to come up with the right performance target. STI has developed the chassis with a full complement of performance upgrades that will include tires and wheels, aerodynamic parts, suspension and dampers that lower the body posture and large-capacity STI brakes that can be seen poking through the custom wheels.

The new 2015 Subaru Forester STI is coming and will be fully revealed on November 25, 2014. The big question is, will we see the new Forester STI in the U.S. and other global markets like Europe and Australia? Stay tuned to Torque News.

Humphrey Mbugua wrote on October 26, 2014 - 1:02pm Permalink
My dream car.Tribeca also
Alex McDonough wrote on March 28, 2015 - 5:14pm Permalink
Hopefully it will be easier to change the head gaskets on this model.