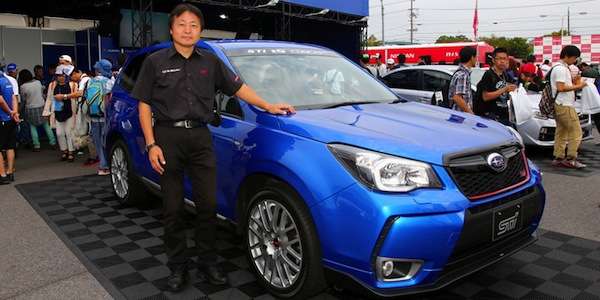 Subaru and Subaru Tecnica International Co., Ltd. (STI) had a booth at the Japan Motorsport Festival 2014 and they brought a surprise 2015 Subaru Forester STI to the event. They also showed off their Subaru BRZ GT300, Subaru WRX STI NBR Nurburgring challenge car, Subaru BRZ rally car and new 2015 WRX STI rally car. Will Subaru be producing a performance 2015 Forester STI in the future?

Fuji Heavy Industries (FHI), maker of Subaru automobiles called this new Forester the Forester tS Concept. We know that tS means “Tuned by STI” and that this 2015 Forester is a prototype of what STI can do when they get their hands on one of Subaru’s vehicles. We’ve seen Subaru launch the BRZ tS in Japan, the Forester tS in Russia and the LEVORG STI in Japan and Europe recently. Subaru also offered STI versions of the Legacy sedan (Liberty in Australia), and Exiga.

STI may evolve into performance sub-division

But these have been low volume production runs of between only 200 and 800 vehicles. Subaru has never had a full lineup of Subaru-STI performance vehicles at the top of the regular production model lines like we see from other automakers. Back in March, FHI corporate communications spokesman Masato Saito talked to CarAdvice at the Geneva Motor Show. Saito says in-house tuner and motorsports partner STI may evolve into a performance sub-division in the future to rival Nissan’s Nismo sports arm. Saito said, “creating a family of high-performance STI variants positioned at the top of a number of model lines was a good idea.”

The admission free Japan Motorsport Festival 2014 is designed to introduce families and kids to motorsports for the very first time. This free event draws hundreds of families with kids who have never attended a motorsports race and is used to encourage the interest in motorsports and the cars. Subaru used their booth to show off all their motorsports cars, but the 2015 Forester STI was a surprise.

Subaru Motorsport, directed by STI already has an expanded race agenda with the Super GT series which includes the BRZ GT300, 2015 WRX STI they run in the Nurburgring 24-hour endurance race, WRX STI in the WRC and ERC, and the 2014 Subaru WRX STI in the Rally America and Global RallyCross series. They also brought the new 2015 Subaru WRX STI rally car and Subaru BRZ All Japan rally car to show fans at their booth. All these race cars help Subaru develop the technology for their performance production models like the 2015 WRX and 2015 WRX STI.

Subaru brought the 2015 Forester tS Concept vehicle to the show for a reason. Subaru and STI may be thinking that creating a family of high-performance STI variants like a new 2015 Forester STI is a good idea. We’ll continue to follow what Subaru has up their sleeve for future performance models.

Other 2015 Subaru Forester stories of interest.
Subaru hits the sweet spot with the 2015 Forester