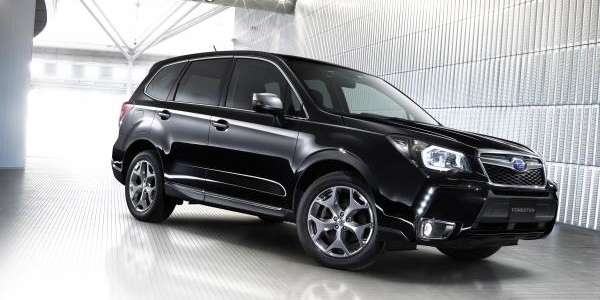 The new 2015 Subaru Forester “2.0XT EyeSight Advantage Line” on May 30 in Japan.
Advertisement

It’s a special edition Forester SUV model that will launch in the Japan market. But we’ll likely see some variant of this sporty model here in the U.S. The special edition will launch in Japan on May 30, 2014. It will come with new upgrades both inside and out to set it apart from the standard Forester. Subaru says it brings a “premium feel to the performance of high-performance.”

In addition to the performance 2.0-liter turbo DIT engine, the 2015 Forester “2.0XT EyeSight Advantage Line” will feature interior and exterior goodies to set it apart. On the inside, this special edition will come with ultra suede leather on the door trim, steering wheel and seats. The instrument panel will get a special blue metallic decorative trim along with silver and black piano trim on the air conditioner rings. The seats, doors and center console also come with blue stitching.

Outside the 2015 Forester “2.0XT EyeSight Advantage Line” gets special exterior treatments. It will come with satin plated door mirrors, 18-inch aluminum wheels with a special high raster paint. Underneath, drivers will be treated to the new 2.0-liter horizontally opposed direct injection turbo (DIT) powerplant. This engine uses Subaru’s latest technology and is a great performer. It will deliver superior performance in the Forester SUV package.

This new 2015 Forester will also come with Subaru’s new-generation EyeSight safety system. EyeSight processes stereo images to identify vehicles traveling in front, any obstacles, traffic lanes and other potential hazards. Information is then relayed to the EyeSight computer, which is also networked with the car’s braking system and electronic throttle control. It can even detect pedestrians in the vehicle’s path and notify the driver. At speeds under 30 mph, Eyesight is able to bring the car to a complete stop, thus avoiding a collision.

There's nothing outside that announces what is underneath for performance enthusiasts. But this will be a sporty family hauler that will get the kids to soccer practice or to the ski slope quickly. Look for the all-new 2015 Forester “2.0XT EyeSight Advantage Line” to launch in Japan on May 30. Hopefully we’ll get some version of the new special edition 2.0XT here in the U.S. and other global markets.

Other 2015 Subaru Forester stories of interest.
How 2015 Forester shows Subaru will be number one brand in two key areas

John Paraskeva wrote on August 18, 2014 - 2:39pm Permalink
do you know the release date in the USA of the new 2015 Subaru Forester 2,0 turbo with the new second gen Evesight system .
Jeff wrote on November 19, 2015 - 11:08am Permalink
"At speeds under 30 mph, Eyesight is able to bring the car to a complete stop, thus avoiding a collision." I believe this statement is only partially correct. From reading Subaru's EyeSight information, I understood that it can stop the vehicle with a 30mph delta between your traveling speed and the object in front of you. Thus, if you are traveling 60mph and a car turns onto the road in front of you and is only traveling 30mph, EyeSight would reduce the speedy by a maximum delta of 30mph to avoid the collision, therefore resulting in your Subaru traveling 30mph after EyeSight steps in. Please let me know what you guys think.