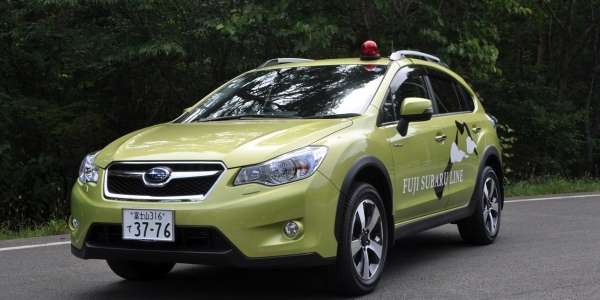 The 2014 Subaru XV Crosstrek Hybrid will be used as a patrol car on the Yamanashi Prefecture Highway. Why not the 2015 WRX STI?
Advertisement

Fuji Heavy Industries, maker of Subaru vehicles, donated the performance XV Crosstrek Hybrid to the Yamanashi Prefecture Highway management office for use as a patrol vehicle for the highway. It’s all part of “beautification and enlightenment” for the toll road that leads up to Mount Fuji. Subaru is no stranger to the toll road which opened in 1964 with another Subaru car, the Subaru 360, which was part of the opening ceremonies.

Today, Subaru and the 2014 XV Crosstrek Hybrid was again given the honors to patrol the highway and bring public attention to the environment around Mount Fuji. The patrol car’s job will in part be for its social contribution activities and is intended to provide cooperation to environmental sustainability conservation activities in the surrounding area with a focus on the patrolling the Yamanashi Prefecture Highway.

A sportier version of the gas-only XV Crosstrek

Of course the 2015 Subaru WRX STI would be a better choice from a performance car standpoint, but the greener 2014 XV Crosstrek Hybrid is a sporty performer on its own. A torque-rich 13.4-horsepower electric motor is mated to the XV Crosstrek Hybrid’s 2.0-liter boxer engine. The hybrid gets an extra 12 horsepower and 18 lb. ft of torque over the gas-only XV. Even with the extra 300 lbs. for the battery, the Hybrid’s power is impressive. And the max torque from the electric side is available at 2,000 rpm compared to the gas-only VX’s 4,200 rpm.

Think of the XV Crosstrek as a sportier version of the gas-only model. The suspension and steering have been retuned for sportier driving dynamics, so the hybrid is more fun to chuck into corners. We tested the hybrid in the mountains west of Denver and this crossover with the continuously-variable transmission (CVT) with a simulated manual-shift mode and steering wheel paddle shifters offered plenty of spirited driving fun.