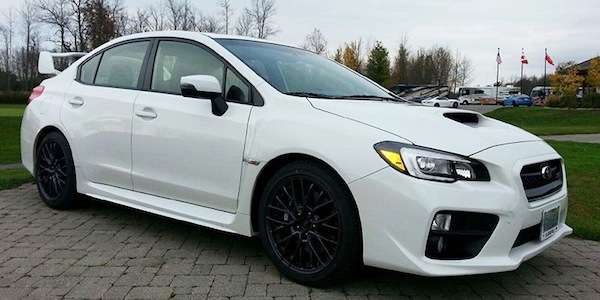 The new 2015 Subaru WRX and WRX STI are two very different cars. Here's 5 reasons you should not buy the WRX but choose the STI.
Advertisement

The new 2015 Subaru WRX and WRX STI are out and buyers are flocking to showrooms to buy the performance sedans. Sales of the sports cars are brisk and there are long waits to get one. With the Lancer EVO going away, this is the last rally-bred performance car left for performance enthusiasts. But the two models are very different and the STI is the better choice for true performance fans. Why should you choose the STI over the WRX?

STI is a true track car

The 2015 Subaru WRX STI was developed for the World Rally Championship and continues to be used on the rally courses around the globe. The 2015 STI is already being used by the Canadian and Japanese teams around the globe and we’ll see it on the Rally America Championship and Global Rallycross starting next year. With a few modifications, the STI is ready for the track and many fans take their sports cars to the track on weekends. For a true fan, the STI suspension is already set up for superior driving dynamics on the street or track. With a few more modifications to the engine, it’s ready to take on any challengers.

STI comes with an extra firm suspension that was developed by STI for Rally racing. If you don’t like a stiffer ride, you aren’t really in the market for a true sports car anyway. STI is designed for performance fans who will likely take it to the track. It’s really the only way to experience all the potential this car offers. But with the stiffer suspension, STI also comes with incredible cornering ability.

Most people think the big STI wing on the rear deck looks gaudy, but the big wing on the back actually serves a very specific purpose. It keeps the rear wheels firmly planted on the ground at high speeds. The faster the car goes, the more downforce it provides in the rear. Many think its just for show and that “boy racers” want to flaunt the image. It works and it works extremely well if you want to keep the rear firmly planted. See how the STI did on the Isle of Man setting a new course record in the link above.

2015 WRX STI comes with the SI Drive throttle control system with three settings for performance driving. While many unskilled drivers won’t know what to do with these settings, they are the ones who should be buying the tamer WRX. Experience drivers will use their new STI in multiple driving situations where they will all be used. Driving enthusiasts will use Sport for driving around town, Intelligent for driving in the rain and snow when extra traction is needed and Sport Sharp when they are at the track or while driving the twisty back roads. The Driver Controlled Center Differential (DCCD) also gives drivers who know what they’re doing three settings for dry roads, dirt, and extra cornering ability.

The new 2015 WRX was built to appeal to wider audience and gets a new 2.0-liter direct-injection turbo (DIT) powerplant with 268 hp and 258 lb ft of torque. It’s designed for better environmental performance and for the average driving enthusiast and will perform extremely well under most driving situations. 2015 STI is still powered by the 2.5-liter turbocharged Boxer engine producing 305-horsepower and 290 lb ft of torque. Most STI buyers will make power modifications to their cars while many WRX buyers will not. The 2.5-liter will allow easier modification for performance enthusiasts to get the maximum hp out of this mill. Like we said above, STI comes with a stiffer chassis and big Brembo brakes for superior handling agility and precision on the race course. This engine and chassis setup is better suited for extreme performance.

STI is a true performance car and the 2.5-liter turbocharged boxer engine isn’t designed for putting around town. The average driver will be disappointed if they are looking for a family cruiser to just commute to work. The 2.5-liter responds best after you get the rpm’s up. This car isn’t designed to just be driven to the grocery store. WRX STI features a rally-bred drivetrain that has deep roots in Rally racing. Its excellent all-wheel drive handling is better suited for the track than it is just be used as a daily commuter. This sports car needs to be exercised regularly in order to stay happy. It just begs to be driven fast.

2015 STI only comes with a 6-speed standard gearbox. If you are looking for an automatic, you won’t want the STI but the average driver can get a new CVT in the 2015 WRX. This performance car comes with a performance clutch that’s a bit stiffer and if you don’t like to shift often, you’ll get tired quickly. If you commute to work and drive in stop and go traffic, you’ll likely get annoyed. But if you like to drive, the close ratio 6-speed gearbox is a real treat, and the optional STI Short-Throw Shifter is worth every penny.

STI will hold its value better

We’ll throw in one more reason for good measure. The STI will hold its value better than the WRX. When you go to sell your STI, or trade it in for a newer model STI, you will get more money for your STI if you sell to a private buyer, and you’ll get a better deal at your local Subaru dealer when you go to trade it in.

The new 2015 Subaru WRX and WRX STI are very different models and designed for very different buyers. WRX was designed to appeal to much wider audience and the average driver will be happy with the milder WRX. The 2015 STI is the much better choice for true performance enthusiasts.