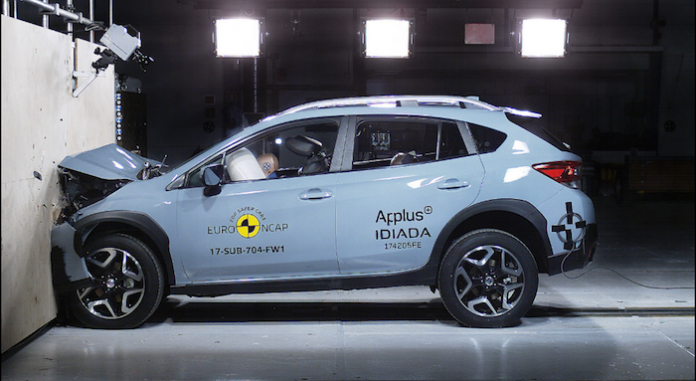 Subaru keeps improving crash protection in the new 2018 Crosstrek and getting awards, but consumers are the real winners.
Advertisement

Both Crosstrek and Impreza models received the maximum five star overall rating and Subaru has been awarded the top rating for the 6th consecutive time. NCAP reports Subaru Crosstrek and Impreza achieved outstanding scores in all four assessment areas (Adult Occupant, Child Occupant, Pedestrian Protection, and Safety Assist), well above the minimum threshold required and with a noticeable high overall average. How does Subaru keep doing it?

Subaru keeps improving crash protection in their vehicles by developing improved rings of safety around the vehicle’s occupants. Both 2018 Crosstrek and Impreza feature the new Subaru Global Platform (SGP), Subaru says was designed to deliver higher levels of safety performance. The global safety ratings they are receiving are proof it is delivering what Subaru promises.

In addition to receiving the highest marks in Europe, Subaru Crosstrek and Impreza also received the highest safety ratings in Japan with both new models receiving an award for reaching 5 star safety ranking in the Japan New Car Assessment Program (JNCAP) crash safety evaluation tests. They also won the 2016-2017 Grand Prix Award for earning the highest safety score ever with 199.7 of maximum 208 points.

The two new models also received the Special Award for having a pedestrian protection airbag as standard (in Japan). After their launch in the U.S., the new Subaru Crosstrek and Impreza received the 2017 TOP SAFETY PICK+ award from the Insurance Institute for Highway Safety (IIHS).

Safety is a core value for the brand and it’s not new for Subaru to excel in the European safety ratings. This is the sixth time that Subaru has been honored with the prestigious five star rating from Euro NCAP following the rating for the Legacy (2009), Subaru XV (2011), Forester (2012), Outback (2014), and Levorg (2016).

Consumers around the globe are buying the all-new 2018 Subaru Crosstrek because it has a “go-anywhere” attitude, but also because it’s getting the highest safety marks around the world. Subaru keeps improving their crash protection and getting awards, but consumers are the real winners.

DCS wrote on February 7, 2018 - 7:15pm Permalink
It looks like only the Impreza, not the Crosstrek, got the IIHS TSP+. The Crosstrek 'only' got the TSP rating.