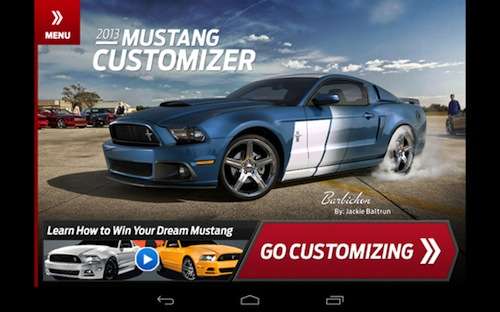 Ford has launched the 2013 Ford Mustang customizer now available as a downloadable app for iPad, iPhone and Android devices with a fun new feature.
Advertisement

The 2013 Ford Mustang customizer can now be downloaded as an app for iPad, iPhone and Android devices. The all-new app allows users to customize and build their dream pony cars wherever they go on their mobile devices. Ford says that nearly half-a-million 2013 Mustangs have been built online since the customizer was relaunched in June. Now the popular feature will include mobile devices.

Ford knew they were onto something big when the original Mustang Customizer app was downloaded more than 250,000 times after it was released in late 2011. The Dearborn, Michigan company now wants to let fans configure their custom Mustang any time and any where. They are expecting even more interest now with the new app.

“Since we relaunched the online Mustang Customizer for 2013 models in June, more than 120,000 people have registered and built more than 450,000 unique fantasy Mustangs,” said Brian McClary, Ford digital marketing manager. “With the new app, fans will be able to configure their one-of-a-kind pony car any time they have a few minutes to spare.”

After a user has personalized the Mustang, they can then save their car and it will be automatically entered into what Ford calls the “battle mode” and other users of the app can vote on their favorite designs. Points can be earned for each car they build, and they can also earn up to 70 different badges for each custom Mustang. There is a feature that allows participants to enter into battles and individual challenges against their friends on Facebook.

Images of the custom pony cars can be saved and used as desktop wallpaper, plus shared on Facebook, Twitter and Google+. Users of the new app will also be able to enter into a contest for a chance to win one of four dream Ford Mustangs by selecting their favorite design.

A fun new feature will be available for the first time. Mobile app users will now be able to enter into a drift challenge with their friends. Players can select any of the custom Mustangs from their “garage” and race it around any one of nine different courses that will be available. Users will be able to compete against each other for the best times on each track.

The new 2013 Ford Mustang Customizer app is available in the Apple App Store for the iPad, iPhone and iPod Touch and the Google Play Store for Android-powered phones.