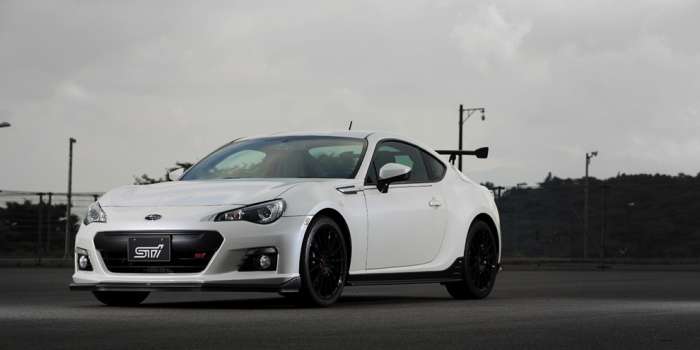 Subaru brought out the new 2014 BRZ tS in Japan. Will we see a new 2.0-liter turbo 2014 BRZ STI next year?
Advertisement

We know that Subaru is working on a new BRZ STI because it’s been seen testing at the Nurburgring in Germany for month’s now. We know it will be getting substantial upgrades in the suspension, but what about the engine upgrades? With the release of the new 2015 WRX, we may have an idea of what Subaru has planned for the new performance BRZ.

We knew Subaru was working on a new 2.0-liter turbo powerplant, and first saw it in the 2014 Forester. Subaru then unveiled a newer highly-tuned performance version in the 2015 WRX at the Los Angeles Auto Show 2013 last month. The new 2.0-liter mill comes with some improvements that make it ideal for the new BRZ STI. Up until now, Subaru has said it couldn’t fit a turbo version in the BRZ because of need ing more room in the engine bay.

The new 2.0-liter turbo produces more power for sure and is what BRZ fans have been asking for. But the most significant improvement comes in its weight reduction and engine placement. The new turbocharged powerplant sits lower in the chassis and would give engineers enough room for the turbo in the BRZ.

The new 2015 WRX engine would be perfect for the BRZ STI. The new 2.0-liter Direct injection turbo (DIT) engine uses a combination of direct injection, high compression (10.6:1), Subaru Dual Active Valve Control System (D-AVCS), a twin-scroll turbocharger and an intercooler to get improved performance. It also gets a broader torque curve and peaks at 258 lb.-ft. over a 2,000-5,200 rpm engine speed range. The torque comes on strong in a lower rpm range and is easy to control for the average driver.

This will be a significant upgrade from the current DI/port-injection system engineered with Toyota technology for the current normally aspirated BRZ and Scion FR-S. According to Automotive News, the new model could produce as much as 280 hp and 250 plus lb ft of torque in the BRZ performance model. That would make BRZ performance fans very happy.

This is likely what has been seen testing in Japan and in Germany in prototype BRZs on the track. We also know that Subaru is considering rolling out more performance models from their performance division STI. We will see the first performance STI sports tourer called the LEVORG when it makes its global debut in Japan next month. And Subaru already has a Forester “tS” they are testing in Russia.

The only reason we haven’t seen a new BRZ STI before now, is because Subaru was perfecting the new 2.0-liter turbo powerplant for the WRX and new LEVORG sports wagon. Now they should be ready to launch a new BRZ STI with more hp. The new BRZ with STI badging will likely debut sometime in 2014 and could be a 2015 model. Stay tuned to Torque News for the latest Subaru BRZ STI news.

Swoops wrote on February 15, 2014 - 1:15am Permalink
A turbo BRZ would be great! I seriously can't wait to see this happen