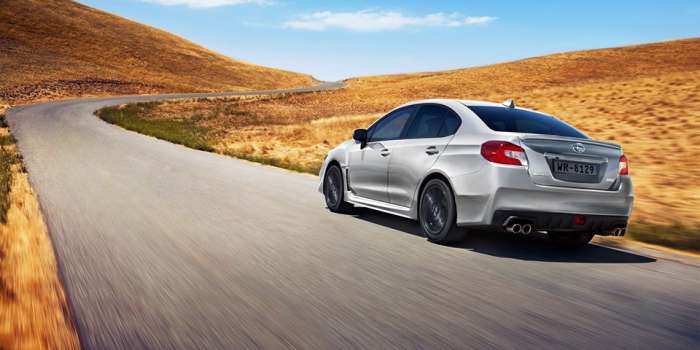 Subaru nails the handling on the all-new 2015 WRX [video]

Subaru has released a new development video on the all-new 2015 WRX that shows how they have improved the driving performance and handling of the WRX. Did they succeed?
Advertisement

Any automaker who is serious about performance, gets the latest technology from their involvement in motorsports. The new 2015 Subaru WRX was developed with Subaru’s extensive involvement in the WRC, Rally Cross, Super GT Series and Nurburgring 24-hour endurance racing with the WRX STI. Most of the racing technology filters down to the factory cars and makes a difference in everyday driving performance. This is even more true with the performance 2015 WRX.

Fuji Heavy Industries Ltd Product General Manager Masuo Takatsu explains in the WRX development video below, how they used this information to develop and improve the new-generation WRX. Subaru’s concept is “pure power in your control” and they focused on improving the driving performance and handling of the WRX for the performance enthusiast and also the sports enthusiast. How did they transfer this motorsports knowledge to the new WRX?

Subaru focused on the steering and suspension

They focused first on improving the steering response so it's similar to that of European sports cars, specifically the Porsche 911. The stability of the car has also been improved, and they sharpened the turn-in of the new WRX. Of course the Subaru rear-drive biased all-wheel-drive system plays a big role in the driving dynamics. Subaru has spent decades perfecting their Symmetrical AWD.

Product manager Masuo Takatsu says in the video, "With the rear wheels getting a firm grip, we then got the rear axis to become the center of rotation and the car revolving around that point. This is the driving feel we were aiming at. When the rear tires slide or the rotation axis becomes unstable it is difficult for the driver to get the line they are aiming at, but if the rotation axis and the rear end are firm, you can revolve around it and steer the car wherever you want it to go."

Front wheel drive and even rear-drive sports cars can become hard to control in dirt, snow and ice at higher speeds. Subaru’s goal was to keep the rear wheels gripping so the driver could control the car easily through the corners at high speeds. This is aimed at any driver who gets behind the wheel of WRX, experienced in performance cars or not.

Takatsu went on to say, “So, what we were going for is a solid grip at the rear in order to give a sharp turn in at the front. The rear grip creates a feeling of security and no fear of spinning out of control. You can then take the car and put it wherever you want it to be. That was our goal.” Did they succeed?

Subaru also worked on the stiffness and rigidity of the body which has a direct relationship to the firmness of the suspension. It enabled the Subaru engineers to pull out the full potential of the suspension. So they focused on the stiffness of the body which allows the hard suspension to stroke and move like a true sports car. Subaru wanted to “reduce friction” in the new WRX suspension and Takatsu said it was a big issue. Engineers tweaked how each coil spring was wound to reduce the friction in the stiff suspension.

The new 2.0-liter Direct injection turbo (DIT) engine also plays a big part in the driving dynamics of the WRX. The WRX engine uses a combination of direct injection, high compression (10.6:1), Subaru Dual Active Valve Control System (D-AVCS), a twin-scroll turbocharger and an intercooler to get improved performance. It also gets a broader torque curve and peaks at 258 lb.-ft. over a 2,000-5,200 rpm engine speed range. The torque comes on strong in a lower rpm range and is easy to control for the average driver.

WRX gets a new powerplant

A big difference between the new-generation WRX and the outgoing model is the new 2.0-liter engine replaces the larger 2.5-liter Boxer engine. But it produces more power, and the most significant improvement comes in its weight reduction and engine placement. The new powerplant sits lower in the chassis for better weight distribution and will give the 2015 WRX better handling in the corners. Subaru learned this from their motorsports involvement with the WRX STI. And it will also be fast on the straights. Subaru says it will launch from 0-60 in just over 5 seconds.

Subaru is not just targeting pure performance car fans but sports fans in general who will use the new WRX for everyday sporting activities. They want the new 2015 WRX to appeal to a wider audience beyond the loyal WRX fans. Whether you like the new exterior styling or not, it looks like Subaru nailed the handling and performance of the new-generation WRX. Subaru wanted to keep their loyal performance fans happy and also appeal to new sports enthusiasts who don't need to be experienced driving performance cars.