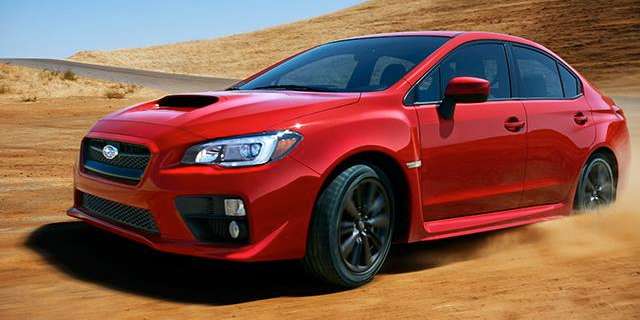 Will upgraded 2015 Subaru WRX STI appeal to a wider audience?

When the all-new 2015 Subaru WRX STI is unveiled next month, will it appeal to a wider audience beyond the loyal WRX STI fans?
Advertisement

Will the new-generation 2015 Subaru WRX STI appeal to a wider audience without alienating their current loyal fans? Subaru didn’t drastically change the exterior styling, but where the biggest differences are coming, is in new chassis upgrades and in new refinements in the cabin. Will Subaru be able to broaden the appeal of the new-generation WRX STI to include new performance buyers who have never considered purchasing a Subaru vehicle before?

Before the unveiling of the 2015 WRX, Australia Subaru boss Nick Senior had a chance to drive the new 2015 WRX and was thoroughly impressed with the new changes. He said, "I've had the opportunity to drive it and I think it will not disappoint any of our existing customers."

But the big question is, will Subaru be able to keep their current performance fan base happy with the new WRX STI? We do know that the new 2015 performance model will be lighter and more agile than the previous generation models. Subaru will likely make use of carbon fiber in the new roof to reduce overall vehicle weight. But the cabin will see the most significant upgrades to appeal to a wider audience. But this won’t alienate existing WRX STI enthusiasts.

Like the WRX, the new 2015 Subaru WRX STI will be coming with new high-tech upgrades and a new refined interior. The new cabin will be roomier and more comfortable before. This is where the appeal to a new audience will come from. It will come with new materials and a wide array of new user technologies.

A big change is seen with its one-inch longer wheelbase over the previous-generation WRX STI. There will be more legroom for taller drivers. This should excite loyal fans too. The larger premium cabin gets higher seating hip points, lower side sills and wider-opening doors that make getting in and out easier. It also features two more inches of legroom for passengers in the back and trunk capacity is increased.

Like the 2015 WRX, the new-generation WRX STI will get upgrades inside like
a new flat-bottom, leather-wrapped steering wheel with tilt/telescoping adjustments and integrated switches for audio and Bluetooth control. A harman/kardon premium audio system will be offered for the first time. It also will come with a new dual gauge instrument layout that features a 3.5-in. LCD central screen. It displays various functions, including oil and washer fluid levels, and selected gear ratio.

A better performer on the road and track

And the new WRX STI above all will be a better performer on the road and on the track. It will get a new tuned suspension with quicker steering response for better handling in the corners. Subaru used the Porsche 911 as a benchmark for the new-generation model. It should carve the corners better than before with a 41 percent stiffer unibody which translates to a 20 percent reduction in body roll in the curves.

It looks like the all-new 2015 Subaru WRX STI will appeal to a wider audience with new high-tech upgrades and a new larger refined interior. And current WRX STI performance enthusiasts will be excited about the new performance upgrades. Subaru won’t do anything to alienate their loyal fans. When the new performance model is unveiled at NAIAS next month, it should be everything they expect and more.

Patrick Rall wrote on December 11, 2013 - 12:44pm Permalink
I think that I love this new look.
Anj wrote on December 11, 2013 - 6:11pm Permalink
They already have started alienating their loyal fans by not offering the WRX in the hatchback or wagon body, and the STI will most likely follow. Subaru has always been about versatility and utility and the hatchback fit that perfectly. I realize that a hatchback is not for everyone and don't sell as well as sedans, but they can't expect each body style to sell equally, its about offering choices to people and without a hatchback or wagon version of the WRX/STI, I will not buy. I could care less about all of the "high-tech upgrades inside" mentioned above. These are my own opinions and I don't expect everyone to feel the same way. I know a lot of people will like the new WRX/STI, but its no longer for me and I feel alienated.
Colleen wrote on December 12, 2013 - 2:18am Permalink
I agree with Anj that the loss of the 5-door STI is a dealbreaker for a lot of Subaru fans. In Seattle, it seems the 5-door WRX and WRX STI models out number the sedans 10 to 1. Or maybe, it's because I notice the 5-doors more often because I'm biased :P I wouldn't buy the sedan...no way!
B wrote on December 11, 2013 - 11:38pm Permalink
Actually Subaru recently said that sales were 50/50 between the hatchback and sedan so it was even sales. Expect the same, aging, power plant in the STi. It's gonna be tears come Detroit and not the good ones. Subaru executives sure know how to alienate their existing customers have have waited years for an all new engine in the STI and a new hatch/wagon in either variant.
kp wrote on December 12, 2013 - 6:16pm Permalink
Not having a hatch will keep the WRX a rarer car than before ... maybe? But I think Subaru will bring it back in the following model years ... after they have built up pent up demand. I have a WRX hatch and it is very very practical for dogs, bikes etc.. The hatch will be missed but it will be back.
FR wrote on December 16, 2013 - 7:29pm Permalink
I like the new look. Don't care about tech upgrades. Engine needs upgrading. Hoping they would do away with the trunk wing my wife hats it wont buy until its gone. Wenatchee
Ski wrote on December 28, 2013 - 11:48am Permalink
Overall I commend Subaru on a great job. I unfortunately would want the wagon version. i have a 2008 Outback XT 5 speed which I love and was planning on getting the new WRX as replacement. Now I am unsure as this model has everything I want minus the wagon. I may get it anyway and keep my XT wagon. I bet this new WRX is going to be a great car to drive. Anyone who has driven WRX cars will know what a great drivers car they are...and the worse the weather is the more their capabilities show. The fact the car isn't great looking will not matter.
[email protected] wrote on January 24, 2014 - 4:17pm Permalink
Will either or both the WRX/WRXSTI have the carbon fiber roof that was mentioned earlier??
kp wrote on January 26, 2014 - 11:24pm Permalink
I doubt a car in this price range will have a CF roof. A remote maybe as an option on the STi.