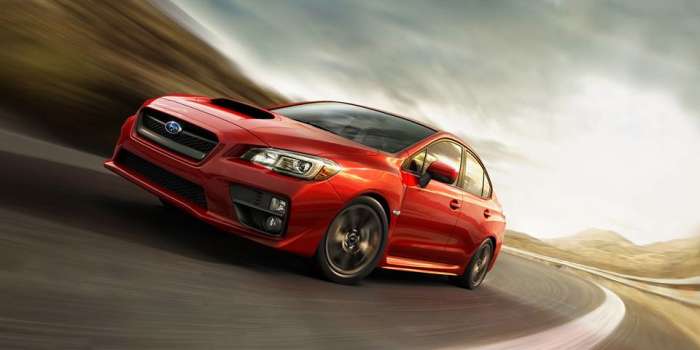 The 2015 Subaru WRX made its global debut in LA and sales at Subaru are strong across the lineup. The new 2015 WRX STI will keep the momentum going in 2014.
Advertisement

The 2015 Subaru WRX STI is getting closer to its global debut and the performance model will keep the momentum going. The all-new 2015 WRX just made its global debut and things at Subaru are going well. Sales for November set new records and it looks like the Subaru brand will have another record year for 2013. The 2015 WRX STI is set to make it’s global debut next month at the NAIAS in Detroit and it’s launch will keep the momentum going for Subaru here in the U.S.

Subaru performance fans are excited to see what the Japanese and STI will bring out in the new high-performance model. We know it look like the 2015 WRX but with a more aggressive body kit, a prominent rear wing and wider body panels. It will also come with new upgrades to the suspension, powertrain and brakes.

Demand for the next-gen WRX STI model should be extremely high. Record numbers of buyers are shopping the performance model and the Subaru brand overall has seen an increase in sales across the entire lineup. Fuji Heavy Industries Ltd (FHI), the maker of Subaru automobiles, is increasing capacity to keep up with the demand.

The new-generation WRX STI will be built in the U.S. as Subaru will likely drop Camry production from their assembly line at their Indiana plant. This will open up the door for a much-needed expansion of the Indiana plant where they currently produce the Subaru Legacy sedan, Outback wagon and the Tribeca SUV. Subaru execs said, “The plan calls for the Lafayette plant to begin producing the Impreza small car by the end of 2016.” That will mean WRX and WRX STI models will see U.S. production.

Subaru has also lengthened the wheelbase which will also improve driving dynamics with a revised suspension and will also enhance space inside the cabin. The new 2015 WRX STI will also get a new torque distribution function. It will come fitted with an additional torque distribution set-up that independently adjusts brake pressure on all four wheels. Subaru has also given the STI extra underbody rigidity enhancements that will also improve the STI’s cornering ability and take it to new levels not seen in the outgoing model.

We still don’t know for sure what the engine modifications will be on the new WRX STI. Will Subaru keep the current 2.5-liter turbocharged four-cylinder Boxer engine or go with a new 2.0-liter turbo that will be lighter and have more power? Subaru seems to be doing the right things with the 2015 WRX and the new 2015 Subaru WRX STI should see vastly improved performance in the suspension and drivetrain. Stay tuned to Torque news for the latest WRX STI news.