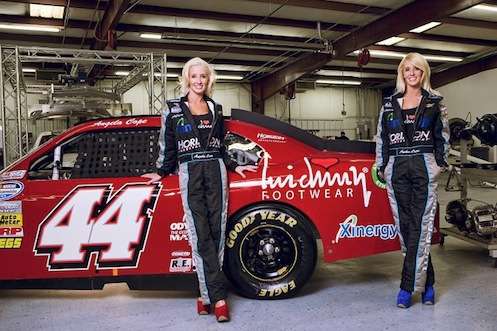 Amber and Angela Cope are taking NASCAR by storm and are using the Kardashian’s as inspiration to build a modeling and fashion empire.
Advertisement

NASCAR racers Amber and Angela Cope appear to be overnight sensations, but their racing career started back when they were nine years old when they began racing go-karts. Now in their late 20’s, the twins are taking the racing world by storm. Not only are they professional NASCAR drivers, but they also have a professional modeling career.

Instead of earning contracts with "oil or gasoline companies," the Cope sisters have landed spreads in Maxim Magazine and campaigns with shoe company Luichiny. In an interview with Styleist, the Cope twins said they have their goals set even higher. "We want it all," Angela says, "We want a clothing line at Walmart, we want a nail polish line."

And they use another set of siblings, the Kardashians, as their inspiration. "We love the Kardashians," Angela says. "I know it's stupid, but the whole empire they built..." Amber continues where Angela left off, "We love how hard those women work to have what they have."

But Amber and Angela Cope have also worked hard to get to this point. In 2010, Amber and Angela made their NASCAR debuts in the same race and realized a long held dream of competing in the Camping World Truck Series in Martinsville, VA. And last year, another dream was realized when Angela finished ahead of her uncle, Derrike Cope, in a Nationwide Series race at New Hampshire Motor Speedway. Derrike won the Daytona 500 in 1990.

In an interview with Maxim, the blonde twins said “we’ve made a few men cry over the years by beating them on the race track. People always underestimate us because they think we’re models or something, but that just makes the victory so much sweeter,” Amber said.

Even though the Cope twins earned the respect of the male drivers on the track, their uncle Derrike still had some advice for the girls. He wanted the twins to tone down their beautiful looks and just concentrate on racing. Angela exclaims, "There were some times when our uncle Derrike would be like ‘Hey, tone down your hair.”

But the Cope twins stayed true to who they are and are happy with that decision.
"We didn’t want to change our look and our appearance like our uncle Derrike wanted us to," Angela continues, "At the time he thought it would help to get sponsorships and that the blonde hair was negative towards their vision. But that’s who we are! There are going to be sponsors out there who like Amber and I." And it looks like the two blonde beauties have found their niche in NASCAR and with Luichiny Shoes, and are well on their way to building a fashion empire.

Tsingshan's Threat to Tesla: EV Maker Is In Battery Crosshairs
Tesla-Funded Research Reveals One of The Biggest Mysteries of EV Battery
END_OF_DOCUMENT_TOKEN_TO_BE_REPLACED