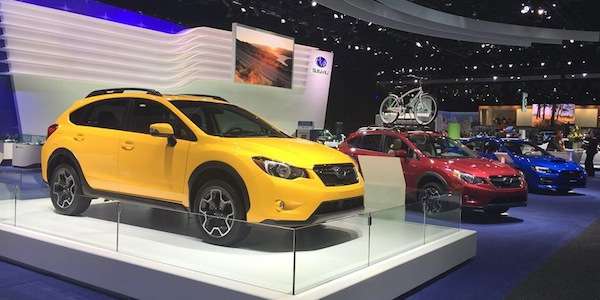 Subaru has been named Best Brand in Kelly Blue Book’s Cost to Own awards.
Advertisement

Being ranked lowest of all car brands in the U.S. would normally not be considered a good thing for an automaker. When it comes to what it actually costs to own a vehicle over a five year period, it’s a very good thing. Subaru has been named “Best Brand” in Kelly Blue Book’s (KBB) Cost to Own awards. According to KBB, that makes the Subaru brand tops when it comes to the best value for your car shopping money.

In this year’s KBB 5-Year Cost to Own Awards Subaru and Lincoln were rated the lowest in cost-to-own over a five year period, and both demonstrate excellent long-term value relative to their respective competition. Subaru was named Best Brand and Lincoln named Best Luxury Brand. KBB’s 5-Year Cost to Own information takes into consideration depreciation, expected fuel costs, finance and insurance fees, maintenance and repair costs, and state fees.

KBB says with their multi-purpose all-wheel-drive lineup of vehicles, Subaru claims this year's 5-Year Cost to Own Award for best brand. They site improved fuel efficiency and a strong reputation for long-term reliability as they key reasons they get the nod. KBB says, “Long popular in the northern and elevated areas of the country, Subaru's appeal continues to expand as its sheet metal becomes more stylish and its message even more endearing.”

KBB editors were also impressed with Subaru’s new infotainment offerings that have recently been upgraded. KBB went on to say, “Long respected as all-weather wonders, Subarus now exhibit recent efforts in the areas of efficiency, functionality and style that have sent them to the top of the CTO class.”

Based on analysis of KBB's 5-Year Cost to Own information for 2015 model-year vehicles, Subaru and Lincoln are the big brand winners.  In addition to a low depreciation cost and strong residual values across its full model lineup, Subaru also has competitive fuel costs, making it the 2015 5-Year Cost to Own: Best Brand among all automakers. In this case, it's good to be viewed as the lowest.

Parks McCants wrote on February 15, 2015 - 12:49pm Permalink
While setting aside your misleading headline for a moment: I find the fact that Subaru has beat all comers in over-all ownership value is stunning! Congratulations Subaru.
J Gilmore wrote on February 15, 2015 - 10:53pm Permalink
The piece of mind traveling in a Subaru knowing inclement weather will not be a problem in most cases due its superb all wheel drive system makes it worth a premium to me. There are lots of four wheel drive, all wheel drive, etc. out there. But what about fuell mileage? You see them everywhere in the north and northwest no matter what regarding weather, unless the road is blocked by others who did not have a Subaru.
Mike Wilson wrote on February 16, 2015 - 10:31am Permalink
Really, how about changing that headline! Readers who do not read the otherwise well-written article are left with the impression that Subaru "ranks lowest", which is rarely a good thing. Not sure if that was done to try to be clever or not, but it is misleading.