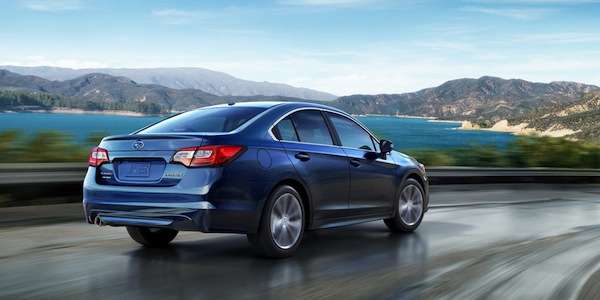 What is the brand that retains its value better than any other in North America? According to ALG, it’s Subaru. Subaru Canada, Inc. (SCI) has been named overall Best Mainstream Brand for 2015 and takes home four Canadian Residual Value Segment Awards from ALG. Winning the Best Mainstream Brand award means that Subaru holds its value better than all other mainstream brands in Canada.

The 2015 Subaru Legacy, 2015 BRZ, 2015 Outback and 2015 Impreza all earned individual awards to catapult Subaru to the top. ALG, is the industry benchmark for residual values and depreciation data in North America. The seventh annual ALG awards honored 2015 vehicles and predicted these Subarus to hold their value better than any other vehicles in the segment.

DON’T MISS: One reason you’ll want to own a 2015 Subaru WRX in five years

2015 Legacy received a complete redesign for 2015 and was just voted Automobile Journalist Association of Canada’s (AJAC) Best Family Car under $30,000. Geoff Helby, Canadian regional director, ALG said, "The all-new Legacy's mix of all-weather capability and Subaru reliability, along with a new dose of refinement, makes it an excellent choice for families.”

In the hotly contested Sports Car segment, the 2015 Subaru BRZ took home the top award from ALG. Because of the two-door rear-drive sports coupe’s low center of gravity, it performs like more expensive sports cars. It also comes with an affordable entry price. ALG says these attributes help the BRZ proudly take home top honors as Best Sports Car for the third year in a row.

"Subaru's rear-wheel-drive coupe is one of the most exciting things to happen to the Sports Car segment in a generation," remarked Helby. "Offering the thrill of a raw sporting experience with the quality of the Subaru brand, the BRZ is a great mix of excitement and value. Few cars can match its feeling of connectedness to the road, even at twice the price."

The 2015 Subaru Outback received a Canadian Residual Value Award in the Mid-size Utility Vehicle in the 2 Row segment for a remarkable fifth consecutive year. This is especially notable as ALG's Residual Value Awards have only been announced in Canada for the past seven years.

Helby talked about the new wagon, "The Outback earns its fifth consecutive Residual Value Award as a unique entry from a brand that draws great loyalty from Canadians. The Outback's 2015 redesign offers a mix of standard all-wheel drive, great utility and interior refinement. Subaru has evolved its SUV alternative over the years, offering a more spacious interior while keeping the benefits of its adventure-inspired roots."

Even more impressive is the 2015 Subaru Impreza’s award. Since the awards' inception, the Subaru Impreza has remained a top pick for six of the past seven years. The compact car won five consecutive segment awards from 2009 to 2013. The newly remodeled Impreza reclaims its top spot for 2015 as Best Compact Car.

"The Impreza's combination of all-wheel-drive capability, segment-competitive fuel efficiency and fun-to-drive attitude makes it one of the most complete vehicles in this hyper-competitive segment," said Helby. "Even relatively late in its lifecycle, the Impreza continues to provide a compelling value for the Canadian market, offering standard AWD in a segment where price is usually a large consideration."

florin marcu wrote on February 13, 2015 - 5:09am Permalink
So, one more a little bit eccentric company becomes main-stream... Of course, they are not the admirers, but the buyers who bring cash. However, as an ancient follower and owner of different Subaru vehicles, I still have complaints that never has been addressed by Subaru: the seats, the 2-part folding instead of 3-part folding backrest of the rear bench, the hilarious, (for an off-road vehicle) overhangs in front, and the engine choice. But, good value for the money, no doubt.

LG's New EV Battery Plant Is a Welcome News for Tesla
Tesla Giga Berlin's New Hurdle: It's Not Only the Gov't, but Now Tesla Itself
END_OF_DOCUMENT_TOKEN_TO_BE_REPLACED