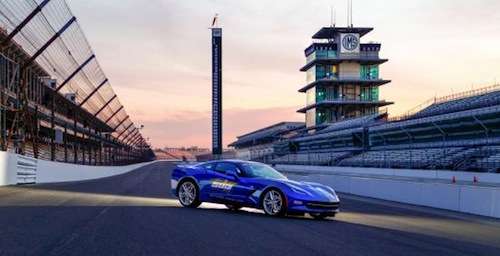 San Francisco 49ers Coach Jim Harbaugh will drive the new 2014 Chevrolet Corvette Stingray Pace Car in the Indianapolis 500 on Sunday as he returns to the NFL city where he played quarterback.
Advertisement

San Francisco 49ers Coach Jim Harbaugh, quarterbacked the Indianapolis Colts from 1994-1997 and was a successful player for the NFL franchise. Now he returns to the NFL city and will make a different drive down a much different field as he gets behind the wheel of the new 2014 Chevrolet Corvette Stingray Pace Car in the Indianapolis 500 on Sunday. This time he will drive in front of a field of 33 race cars to start the 97th running of the Indianapolis 500.

Harbaugh has been in the spotlight a lot the past few month’s as he took his San Francisco 49ers to the Super Bowl this year. Harbaugh led the team to a 11-4-1 record in the regular season, winning back to back NFC West titles. In the Super bowl, Harbaugh faced his big brother John Harbaugh of the old city where the Colts used to play in Baltimore. He took on his brother and the Baltimore Ravens in Super Bowl XLVII.

The 2014 Corvette C7 also appeared at the Super Bowl

It was the first time two head coaching brothers met against each other in the Super Bowl. In an exciting game, John Harbaugh and the Ravens won this game with a score of 34-31. The Baltimore Ravens quarterback Joe Flacco was Super Bowl XLVII MVP and received a new 2014 Corvette for getting the honor. The bright red Corvette C7 appeared on the field at the Mercedes-Benz Superdome in New Orleans after the game where Flacco received the keys.

Harbaugh is no stranger to the IndyCar Series

Harbaugh is a big racing fan and is no stranger to the IndyCar Series. The football coach is also co-owner of Panther Racing in the IndyCar Series. The main car for the team carries Harbaugh's old jersey number, 4. When the team won the 2001 and 2002 IRL championship, the team, which had the option of going to #1, chose instead to keep the #4 for its association with Harbaugh's career.

He has more than his football team as he also fields the two-car, Chevrolet-powered IndyCar team with drivers J.R. Hildebrand and Townsend Bell. Hildebrand will drive the No. 4 National Guard Chevrolet in Indianapolis 500 and Bell will compete in the No. 60 Sunoco “Turbo” Chevrolet.

The Iconic Chevrolet Corvette Stingray is also no stranger to the Indy 500. The Laguna Blue Pace Car marks a record 12th time the Corvette has served in the role, starting in 1978. This year, Harbaugh will be behind the wheel of the all-new 2014 C7 Corvette Stingray as he paces the field. “As a longtime racing fan and someone who has always followed the Indianapolis 500, the honor to drive the pace car comes as a tremendous thrill,” said Harbaugh. “Doing it in the all-new 2014 Corvette Stingray makes it even better. It’s an iconic car leading an iconic race.”

Harbaugh also gets help with his heart

Jim Harbaugh also got a new heart of sorts as he underwent a heart procedure last November to correct an irregular heartbeat. He was able to resume normal activities with his San Francisco 49ers and the procedure was a success. “Coach Harbaugh, like he always tells us, he’s tougher than a two-dollar steak,” Patrick Willis said. “We know he’s going to be all right.”

The coaching lifestyle of high stress, lack of sleep and too much caffeine, three contributing factors to the heart condition, don’t mix well. The condition can also be treated with medication as well as behavior modification. Which might not be terribly successful with a nearly 49-year-old NFL coach who is known for his competitive spirit on the field. “It’s great to have a true racing fan like Jim Harbaugh drive the Corvette pace car,” said Jim Campbell, U.S. vice president of Performance Vehicles and Motorsports. “He personifies the Indianapolis 500’s spirit of competition – and he’s a true athlete, just like the all-new Corvette Stingray.”