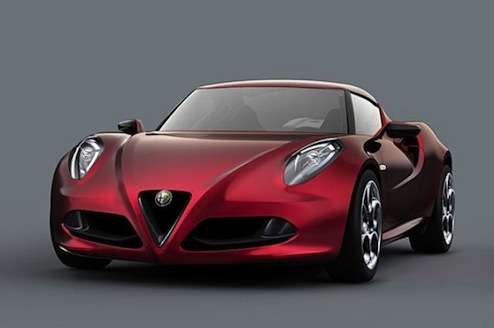 Alfa Romeo will be building a convertible version of the 4C that will be introduced after the coupe makes its way back into the U.S. market next year.
Advertisement

Alfa Romeo will make its first introduction back into the U.S. market with the 4C coupe sometime next summer. Reports say that a convertible variant will be built and will arrive a year after the coupe makes its debut. The launch date of the coupe has been moved up and is expected to arrive on U.S. shores next summer. Sources have confirmed that the soft top version of the 4C will arrive a year later in the summer of 2014.

The Alfa Romeo 4C pictured above made its debut at the Geneva Motor Show in 2011. The 4C coupe and convertible will be a rear-wheel-drive lightweight sports car powered by an aluminum block 1.7-liter, direct-injected turbo four-cylinder. The coupe is expected to weigh in at around 1870 pounds with the drop top weighing slightly more. The turbocharged engine could produce as much as 250 horsepower when it reaches production. Weight distribution is reported to be 40-percent front/60-percent rear, with the engine mated to a dual-clutch automatic gearbox with paddle shifters.

The 4C's light weight is made possible through the extensive use of carbon fiber that was originally developed by Italian race car specialist Dallara for the Alfa 8C, Bugatti Veyron and KTM-Bow. Reports say Alfa has turned over the development process in-house to a team headed by Fiat’s engineering chief, Mauro Pierallini. The lightweight sports car is expected to produce 4.5 second 0-62-mph times.

Underneath, the subframe is formed largely from aluminum with the suspension consisting of multiple links in the front and struts out back. The combination of light weight and the power-to-weight ratio suggests the performance of the 4C will be on par with that of a Porsche Cayman. The car is equipped with Alfa’s “DNA” chassis-adjustment system that includes Dynamic, Normal, and All-Weather modes.

Exterior styling on the convertible should look much like the 4C that was unveiled in Geneva, but don’t expect an exact copy of the concept car. The coupe and convertible are expected to be built at the Modena Italy plant with a possibility of an additional North American plant in the works. Pierallini says Alfa will build up to 18,000 units of the small carbon-intensive sports car annually. Pierallini, said that the 4C is targeting a $55,000 price tag.

Fiat has big plans for growth of its brands in North American, and the Alfa Romeo 4C coupe and convertible will be a big part of those plans.

Nicolas Zart wrote on August 11, 2012 - 1:02pm Permalink
Even though I'm into electric and plug-in hybrids, I'm also a great Alfa Romeo fan and can't wait for this little jewel to give our German friend some friendly competition :) Now how about an electric or PHEV version of it?