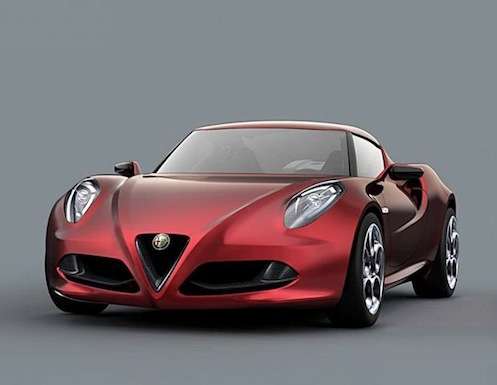 The production date of the Alfa Romeo 4C has been moved up and will arrive in the U.S. much sooner than expected.
Advertisement

As we reported here in April, Maserati will begin building the Alfa Romeo 4C at their Modena Italy plant along side their flagship Gran Turismo coupe and convertible models. According to the good folks over at Auto Car, insiders are saying the much anticipated Alfa Romeo 4C launch date will be moved up and will be officially unveiled next summer here in the U.S.

It was originally thought that the Alfa Romeo 4C would take its bow at the 2014 Detroit Auto show in January. But this is welcome news for those who have long waited for the return of Alfa Romeo to North America. The Italian mid-engined sports car that made its debut at the 2011 Geneva Motor Show, looks like it will be arriving six-months ahead of schedule.

Is a North American plant in the works?

The report by AC also reveals that the Alfa Romeo 4C will be built at “two global production sites” which means the Modena Italy plant that we know of, and also a North American site could be in the works. As we reported before, Maserati estimates it will build up to 2,500 units of the small carbon-intensive sports car annually. But with the addition of a North American production facility, that number could be increased significantly. It would also explain the ability to move up the launch date by six months.

Maserati says it plans to ramp up production and will build up to 50,000 of its own trident-badged cars by 2015, which is 10 times the cars it currently produces. The Italian company also plans to launch three new models over the next 24 months. Fiat has big plans for growth of its brands in North American, and the Alfa Romeo 4C is a big part of that plan.

Performance on par with the Porsche Cayman

The 4C is a lightweight rear-wheel drive mid-engine design that will weight less than 1870 pounds. It is expected to be powered by a 1.7-liter, direct-injected turbocharged four-cylinder engine that will pump out 296 horsepower. The aluminum-block engine will also be used in the new 2015 Spider and could be used in other Fiat/Chrysler models across the lineup. With that type of horsepower, the 4C will be one quick sports car.

Weight distribution should be ideal with a 40-percent front/60-percent rear, with the engine mated to a dual-clutch gearbox. The combination of light weight and the power-to-weight ratio suggests the performance of the 4C will be on par with that of a Porsche Cayman.

It’s good news for those who have been eagerly waiting for Alfa Romeo to arrive back on U.S. shores, and it looks like the Alfa Romeo 4C will be making an early arrival.

Tesla-Funded Research Reveals One of The Biggest Mysteries of EV Battery
Tesla Tesla Buyer Nets a Whopping $12,000 Discount After Asking for Reduction
END_OF_DOCUMENT_TOKEN_TO_BE_REPLACED