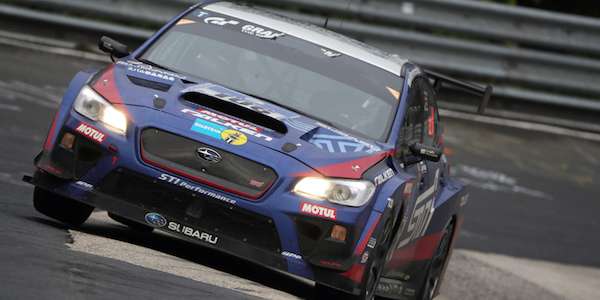 5 Reasons Why Subaru Should Upgrade 2018 WRX STI to 2.0-liter engine

The 2017 Subaru WRX STI still runs the 2.5-liter engine it came with in 2004. When will Subaru upgrade the outdated mill?
Advertisement

The 2017 Subaru WRX STI 2.5-liter engine has been a good workhorse, but it needs to be replace with a new powerplant. There’s 5 reasons why Subaru needs to upgrade the 2018 Subaru WRX STI with the 2.0-liter turbo engine. Subaru runs this engine in all their motorsports machines. There’s 5 cars Subaru Tecnica International (STI) uses it in to power their successful race program around the globe. It’s a proven winner.

The purpose-built 2016 Subaru WRX STI Time Attack car driven by Mark Higgins, just shattered the lap car record at the Isle of Man TT course. It has the 2.0-liter turbo engine under the hood. The previous record was held by the 2015 WRX STI powered by the 2.5-liter mill.

The SUPER GT Series is widely regarded as Japan’s top motorsports category, where STI races the BRZ GT300. Subaru also runs the 2.0-liter boxer engine with enhanced engine performance in this motorsports event. They’ve won a number of races over past few seasons.

Subaru is working on a 2017 WRX STI supercar

Subaru competes in the Rally America Championship where David Higgins is behind the wheel of the 2016 Subaru WRX STI. What powers the highly successful car? Of course the 2.0-liter mill. Higgins is working on his seventh drivers title with this engine under the hood.

Subaru also runs the 2.0-liter engine in their Global Rallycross cars that pump out around 600hp. Subaru is now building a new 2017 Subaru WRX STI supercar that will likely use the same engine that Prodrive and STI used to shatter the IOM TT record. The Time Attack 2.0-liter has a rev limit of 8500 vs 6500 rpm for the current GRC powerplant. Power output is believed to be around 600hp and 400 lb. ft of torque.

The Subaru 2.0-liter EJ20 horizontally-opposed turbo engine is a proven winner. Subaru needs to upgrade the 2018 Subaru WRX STI with this powerplant. Will Subaru do it? Stay tuned.

Kenny wrote on July 2, 2016 - 7:11am Permalink
Hello Torquenews, I am a huge fan of your car news but i would like to comment on this post. If i am correct, the EJ20 is just as old design as the EJ25 thats used here in the USA. If anything, Subaru needs to upgrade the STI with the new FA20DIT used in the 2015+ WRX/S4. The FA20DIT uses direct injection and it uses a timing chain instead of a belt. Its way more efficient and durable than the EJ series.
Denis Flierl wrote on July 3, 2016 - 9:28am Permalink
Hey Kenny, you are exactly right. I should have clarified that. The new 2.0-liter DIT WRX engine gets direct injection and many other engine upgrades. Subaru uses a similar (with more hp) variant in the Japan-only WRX STI S207. Thanks for reading!
Danny van Delft wrote on July 25, 2016 - 6:50am Permalink
The S207 uses the EJ20. not the FA20. Get your facts straight.
Gregory Derian wrote on July 12, 2016 - 11:54am Permalink
I hate to say this... but your reasons are misleading. While the cars you reference are great, they are not productions cars, and the engines are far from being considered stock (550HP for the TT car is an example). For production vehicles with a 2.0L engine, even with direct injection, they still do not have enough low end torque to satisfy most US sport car enthusiasts. That is why there are so many 2.3L, 2.4L (Focus RS), and 2.5L engines being used right now. I feel Subaru needs to replicate the FA20DIT in a 2.5L form for the next STi. This would make a great engine for the next 10+ years. Subaru needs to look forward and not towards the past.
danwat1234 wrote on December 11, 2016 - 3:44pm Permalink
A 2 Liter turbo could have enough low end power if they incorporated hybrid technology to give torque on demand.