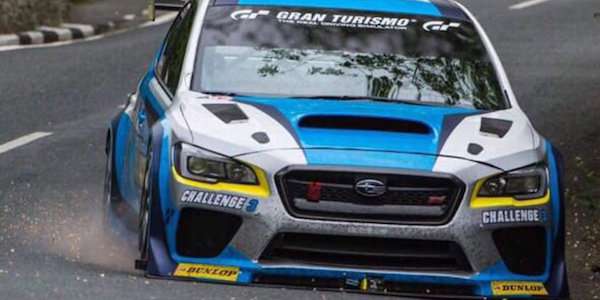 Mark Higgins beat his own Isle of Man record again in the 2016 Subaru WRX STI. How fast was he this time?
Advertisement

Last Saturday, Mark Higgins shattered the previous record from 2014 in the new purpose-built 2016 Subaru WRX STI Time Attack car. On Monday, he beat his time again on his second attempt around the 37.73-mile circuit. How much faster was he? Scroll down to page 2 to watch the new video.

According to a report by Autocar, Higgins lap time was 17 minutes 25.139 seconds. It was more than 14 seconds faster than his posted lap on Saturday, his first attempt. Subaru had scheduled a third and final run on Friday, but it had to be cancelled due to delays caused by heavy fog.

Conditions were almost too hot

The report says, temperatures for this second record-breaking attempt were hot and hovering around 27 degrees C (80.6 degrees F). Prodrive techs were concerned over the effect the heat would have on driveline components like the engine and rear differential. The special Dunlop medium-compound Sport Maxx tires were also worked much harder on the hot pavement.

During the record run, Higgins posted a top speed of 168.6mph through the speed trap at Sulby. The average speed for the record run was 128.730 mph around the 37.73-mile circuit.

PAGE 2: What’s under the hood of the WRX STI?

After the run, Higgins told Autocar he felt he drove better last Saturday. Higgins, said, “I’m delighted to beat the record again. However, I didn’t feel I was driving as well as I did on Saturday. We had a bit of a fuel pressure issue just before the start of the lap but the boys got it sorted. Due to the higher ambient temperature the car was starting to move around a bit towards the end of the lap.”

What’s under the hood of the WRX STI?

Autocar reveals that the 2016 Subaru WRX STI Time Attack car was powered by a 2.0-liter turbocharged boxer engine. We thought this would be the case. It shares a lot of internals with their GRC engines. The Time Attack 2.0-liter has a rev limit of 8500 vs 6500 rpm for the GRC powerplant. Power output is believed to be around 600hp and 400 lb. ft of torque. With a curb weight less than 1200kg, Prodrive says the TT car has a comparable power-to-weight ratio to a GT3 race car.

The Time Attack STI uses a paddle-shift gearbox carried over from the World Rally Car. The gears have been changed to produce a higher top speed, now estimated at 180mph. They also are modified for durability at the higher speeds and temperatures.

Prodrive and Subaru Tecnica International also use a drag reduction system (DRS). This was developed by Prodrive in their association with Aston Martin’s GT race car. Higgins operates the DRS by a button on the dash. It allows him to adjust the STIs drag on the TT’s long straights and change it to give additional downforce in the twist sections and tight corners. Higgins told Autocar, “I’ve got the DRS button down for about 40 percent of the lap, my finger’s quite sore now!”