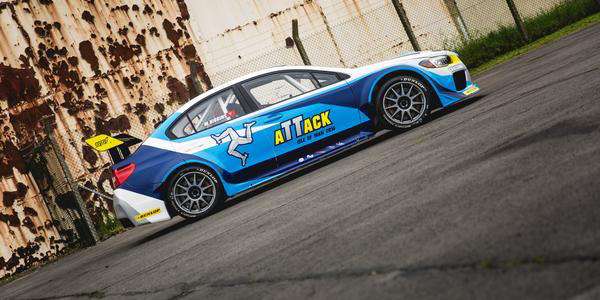 Mark Higgins smashed the record at Isle of Man in the 2016 Subaru WRX STI. How quick was the run?
Advertisement

Subaru’s 2016 Isle of Man TT Challenge 3 WRX STI Time Attack car shattered the car lap record yesterday. Mark Higgins took the modified WRX STI on the first of four scheduled attempts and blew away the record the first time out. How fast was it?

Higgins, who has the car lap record in the near production 2015 WRX STI, completed the 37.73-mile course in 17 minutes 49.75 seconds, equating to an average speed of 126.971mph. That blows away his previous record set in 2014 of 19 minutes 15.88 seconds (117.51mph). That car was nearly stock from the factory and was shod with road-legal tires. The 2016 Isle of Man TT Challenge 3 WRX STI is running Dunlop Sport Maxx slicks like the Subaru Levorg runs in the British Touring Car Championship.

Scroll down to page 2 to see the video clip

Subaru of America, Prodrive and Subaru Technica International (STI) partnered together to build the ultimate 2016 Subaru WRX STI Time Attack car. It looks like they did a masterful job as the modified STI is proving its worth. Mark Higgins is experienced and qualified and will get three more attempts to beat the record time yet again this week.

PAGE 2: Check out the video and what's under the hood

What's under the hood of the Time Attack STI? Subaru still hasn't release what's powering the Prodrive/STI Subaru Time Attack car. Dominick Infante, National Manager of Product Communications, Subaru of America, Inc. said when they revealed the car, this won’t be like the “near-stock” 2015 WRX STI Higgins drove the last time they attempted the record. Infante says, “This year we set out to design the ultimate WRX STI for this circuit.”

Higgins told Manx Radio he isn’t finished pushing the limits of the car: “I think 125 mph was the dream before the start. I’ve only had one practice run so I’m over the moon to do that on only my second lap and there’s a little bit more to come. Definitely from me because I’m learning all the time I go around the track. There’s is a little bit more to come from the car as well.”

The 2016 Subaru WRX STI is scheduled to get three more attempts this week on Monday, Wednesday and Friday. So look for Higgins to go even faster. Stay tuned.