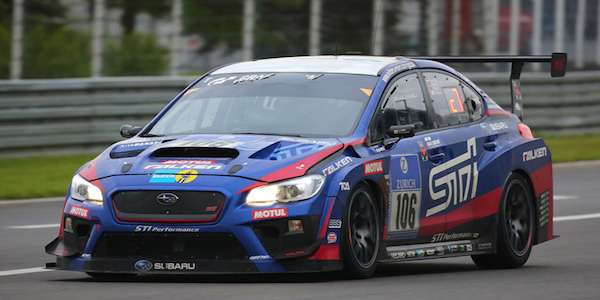 The 2016 Subaru WRX STI wins the Nurburgring 24-hour race. It’s two-in a row. What disaster did the team avoid?
Advertisement

After just four laps, the storm transformed the Nordschleife into a dangerously slippery track between a water slide and an ice rink. The race started in dry conditions but the weather deteriorated quickly and officials suspended the race. The storm left many cars stranded on the track. Some cars made it back to the pit lane under their own steam, while others were towed back. What happened to the STI NBR?

The WRX STI slipped off the course due to the heavy rain and hail, but Carlo Van Dam worked his magic and quickly got the car back on course. He just missed hitting another car that had spun out, and the German driver made a perfect decision and avoided what could have been a disaster and put the STI out of the race.

During the brutal night stage, it’s a tough race for drivers and machine. The team came through in first place. It remained dry and the drivers only reported periods of fog, which reduced visibility. As day broke, rain was still an issue and with 4 hours left, the Subaru WRX STI was in first place in the SP 3T Class and ranked 21st overall. It was wet and soggy, but it didn’t stop the WRX STI from winning big. Subaru has the perfect all-wheel-drive setup for these conditions.

The team wins the Nurburgring 24-hour SP 3T Class two years in-a-row. The #106 2016 Subaru WRX STI NBR ran flawlessly in spite of the wet conditions at the Nurburgring. Congratulations to Subaru, STI and the drivers for back-to-back wins.