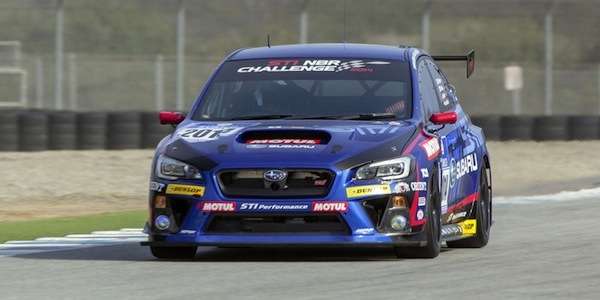 The all-new 2015 Subaru WRX STI NBR race car that will challenge for the Nurburgring 24-Hour Race, has debuted to the U.S. media and journalists. This took place at Mazda Raceway Laguna Seca near San Francisco, California. Subaru of America wanted the media to see the new 2015 WRX STI NBR race car that is based on the new production performance car. The event took place from February 11-14 at the California raceway.

The new 2015 WRX STI NBR first made its world premiere at the Tokyo Auto Salon and was the hit of the show in Japan. Shortly after the debut, the team took the car to Fuji Speedway on 23 January for a “shakedown” event to test the car on the track for the first time. They then shipped the car to the U.S. for this latest event and test run at Mazda Raceway Laguna Seca.

At the event, Subaru Technica International (STI), the performance division of Subaru, also presented the history of Subaru and STI's challenge in the Nurburgring 24-Hour Race over the past 6 consecutive years to the US media. The event also included demonstration drives of the 2015 WRX STI NBR Challenge car 2014 on the track at full speeds.

Laguna Seca is a great place for STI to demonstrate the capabilities of the new race car. Laguna Seca is a paved racing track in central California used for major races such as Moto GP and the American Le Mans Series. The 2.24 mile mid-to-low-speed track features many technical corners along with its infamous “Corkscrew”, a steep downhill S turn with a 49 foot difference in height.

Next up for the new WRX STI NBR, the race car will be transported to Switzerland to debut at the 84th Geneva International Auto Salon in March. After that the car will participate in the two races of the VLN endurance series at Nurburgring in April and May to work on race setups for the main race in June.

This Nurbugring 24-hour race car was developed by STI on the basis of the new 2015 Subaru WRX STI production car that will be in U.S. showrooms this spring. Subaru, Fuji Heavy Industries and STI cooperated to make this car competitive and use the knowledge they receive and transfer it to the 2015 WRX STI production car.

Through this cooperation, the car should be even more competitive this year for the 2014 Nurburgring 24-Hour Race challenge that will take place from June 19-22 in Germany. The Nurburgring is well known as “the ultimate public road” since it has more than 170 corners with rough road surface and 984 feet of elevation change from its lowest to highest points.

STI will challenge for its 3rd class victory by completing in the 24-hour race to drive the race car at high speeds for 24 hours to demonstrate Subaru’s commitment to producing the best performance 2015 WRX STI they can.