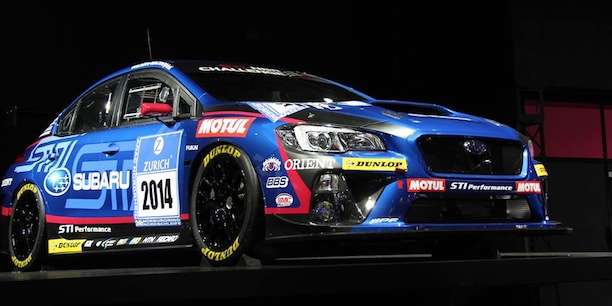 Subaru has released the first video of the 2015 WRX STI 24 hour Nurburgring race car. It gives us a good look at the new performance car.
Advertisement

STI, the performance and racing division of Subaru, will participate in the Nurburgring 24-Hour Race in 2014 again. This year they will bring the all-new 2015 WRX STI in full race trim to compete. The event will take place from June 19-22 in Germany at the famous Nurburgring.

This will be the seventh consecutive year that the STI team will compete in the race. The car they will bring is developed from the all-new 2015 Subaru WRX STI to be revealed at the 2014 NAIAS in Detroit on January 14. NAIAS is where it all started for the Subaru WRX STI in 2003 when the first Subaru WRX STI was introduced to the U.S. market as a 2004 model. The WRX STI is Subaru’s iconic high-performance flagship model and it will be all-new for the 2015 model year. As with the 2015 WRX that was unveiled at the Los Angeles Auto Show, it is also highly anticipated and will arrive with much fanfare.

STI will aim for its third victory in the SP3T class this year following the 24-hour race in 2012. Last year, the WRX STI team started the race from 2nd position and was involved in a heavy head to head battle with Raeder Motorsport and the Audi TT RS 2.0, the winner of the qualifying. The weather was mild for the final race, but deteriorated rapidly as the race went on.

Officials had to suspend the race at 11:00 pm due to heavy rain and fog. The weather improved the next morning, and the race finally resumed after dawn at around 8:00 am. The rain continued, however, and teams struggled to find the right tire choices. The 2013 Subaru WRX STI team was disappointed after the 2nd place finish and not being able to win for the 3rd time in a row. The competition was fierce for the Japanese team against its global competitors.

This year with the all-new 2015 WRX STI car, Subaru will further enhance its engineering excellence with the new car and compete again in the grueling endurance race. Subaru says STI has enhanced the new WRX STI and developed the new car which boasts a higher level of competitiveness by utilizing the technologies of Subaru's mass-produced models.

Hideharu Tatsumi will take the helm of team operations again this year as team manager, in addition to spearheading the development of the new WRX STI race car. Toshihiro Yoshida and Kouta Sasaki are the team drivers from Japan and two more drivers will be added from from Europe.

Take a first look at the all-new 2015 Subaru WRX STI on video as it looks good in full 24 Hours Nurburgring race trim.