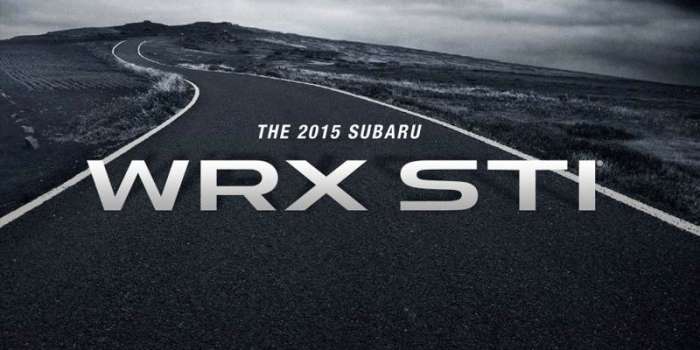 We knew it was coming and Subaru has made it official. The new-generation 2015 Subaru WRX STI will make its world debut at the North American International Auto Show in Detroit. The high-performance STI will be unveiled on January 14 during the press preview and then available for public viewing on Jaunary 18-26, 2014 at the Cobo Center in Detroit, Michigan.

NAIAS is where it all started for the Subaru WRX STI in 2003 when the first Subaru WRX STI was introduced to the U.S. market as a 2004 model. The WRX STI is Subaru’s iconic high-performance flagship model and it will be all-new for the 2015 model year. As with the 2015 WRX that was unveiled at the Los Angeles Auto Show, it is also highly anticipated and will arrive with much fanfare.

We already know a few things about the new 2015 WRX STI. As we reported here back in November, the performance model will get new suspension upgrades that will give the car better handling, balance and stability. Subaru has designed the new suspension layout and it will be called their new “Axle Forward Layout” (AFL).

But the new layout isn’t really that new. Subaru originally unveiled it on the Exiga concept car at the 1997 Tokyo show. Subaru has had the new design in the works for over 15 years. And the new WRX STI chassis will get some major revisions for 2015. It looks like the primary difference between Subaru’s current all-wheel drive layout and the new AFL, is the positioning of the clutch and front differential. Subaru engineers were able to relocate the front axle and it’s now positioned further forward effectively allowing the clutch and differential to switch places.

Subaru has always had very good weight distribution because of the Boxer engine in the WRX STI, but this new positioning allows the engine to sit lower and further back in the chassis, making for even better front-rear weight distribution than before. This should give the new performance model even better handling in the corners.

This modification has allowed Subaru to lengthen the wheelbase one inch which also helps improve driving dynamics with a revised suspension and will also enhance space inside the cabin. The new 2015 WRX STI will also get a new torque distribution function. It will come fitted with an additional torque distribution set-up that independently adjusts brake pressure on all four wheels.

The new braking system electronically manages and restricts torque being fed to the inside tires when turning into a corner. This will effectively reduce understeer by pulling the car into the corner and improve the WRX STI’s cornering ability. Subaru says the car will appeal to wider audience.

Look for the all-new 2015 Subaru WRX STI to make its global premiere at the North American International Auto Show in Detroit on January 14. Stay tuned to Toque News for the latest 2015 WRX STI news.