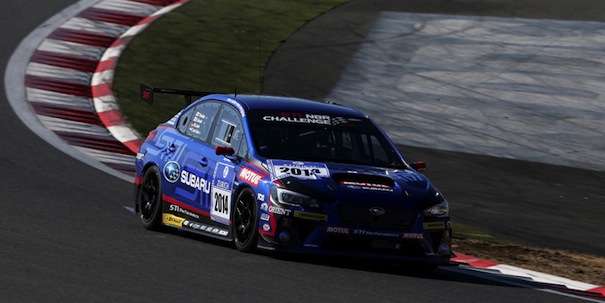 Even with the same engine performance as last years car, the new 2015 WRX STI was faster than last year's by approximately one second per lap. What did STI do to the new 2015 WRX STI Nurburgring car? In previous years, the 24-hour endurance car has had a production version at its core. The new car is based on the 2015 Subaru WRX STI, and is fitted out and tuned for endurance races, but this year’s racer comes with a new sequential shift gearbox.

STI Team Manager Masahiro Ozawa commented on the new gearbox. “The reason for not introducing a sequential shift in previous cars is because of the issue of durability and reliability. We ran the car several times longer than the 24-hour race in tests and repeated disassembly and overhaul this past year before we finally secured reliability. A sequential shift could reduce the possibility of error and burden not just for Japanese but also foreign drivers who are used to left-hand drive vehicles, and we thought that it was important to try out the new technology. The engine itself has been almost entirely carried over from 2013 specifications, but many areas have been improved such as repositioning the intercooler and making modifications to the inlet system.”

The new body style of the 2015 WRX STI also contributes to the improved performance as it’s slippier through the air. The aerodynamics have been improved with as much as a 10 perfect improvement which is huge when it comes to racing. Because of the aerodynamic improvements, the car is faster and the top speed has also gone up on the new 2015 WRX STI racer.

Hideharu Tatsumi, STI’s General Team Manager, commented on this latest model. Our calculation today tells us that this year's vehicle was faster than last year's by approximately one second per lap. Since the engine performance has changed very little, I think excellence in the body and chassis of the new WRX STI has appeared directly. This year, the regulation for the minimum weight of AWD cars will increase to 1220kg from 1200kg last year, and the minimum weight for FF cars will be 1170kg, so I believe that we have a good chance of winning.”

This years drivers will be Toshihiro Yoshida and Kota Sasaki who took the car out during the shakedown at Fuji Speedway recently. Both drivers felt the improvements in the car immediately and could tell the 2015 WRX STI has a more solid body. These improvements were made to the production model and it improves the way the suspension works in the corners.

After the shakedown, Yoshida said, “I felt that the road-holding ability has improved, making me feel even more secure. I can attack confidently, come rain or shine, and so I'm hungry for revenge after last year's defeat. I was able to confirm that our car is nearly perfect already. You never know what's going to happen in competitions but I'm now more confident about winning the race.”

The all-new production 2015 Subaru WRX STI gets the benefit of what STI has learned from racing at the Nurburgring 24-hour event. The insights and knowledge STI has accumulated in the past 5 years has been applied directly to the new-generation WRX STI production car. So you don’t think racing is important? It directly effects what Subaru and STI does to the production WRX and WRX STI and performance enthusiasts get to benefit from that.