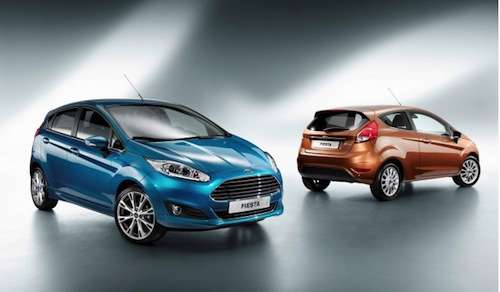 Ford has released details on the all-new 2014 Ford Fiesta ahead of its debut in Paris next month.
Advertisement

Ford has unveiled the new 2014 Ford Fiesta ahead of its debut in Paris next month with a new exterior design, a new EcoBoost engine and new technology inside. The car will be officially uncovered tomorrow at Ford’s “Go Further” product event hosted by Ford President and CEO Alan Mulally and attended by 2,500 dealers. The first Fiesta was launched in 1976 and has since sold more than 15 million models around the world. With the launch of the new Ford Focus, the entry-level Fiesta needed a makeover and it looks like Ford has delivered.

It starts on the outside where the new Fiesta gets Fords latest global design language. The 2014 Fiesta gets sharper styling with new trapezoidal front grille, laser-cut headlamps with daytime running lamps with LED technology, and a power-dome hood. The interior has been redesigned for greater ergonomics and gets a host of new technology features.

The new 2014 Ford Fiesta gets a number of advanced technology features. The Fiesta will be the first among its European competitors to get Active City Stop, a system designed to help drivers avoid low speed collisions. The new enrty-level compact will also feature Ford’s SYNC in-car connectivity system. The system enables drivers to make voice-activate phone calls and select music from devices connected via Bluetooth or USB. The SYNC system includes Emergency Assistance, which directly connects the vehicle occupants to local emergency services operators after an accident, in the correct language depending on what region the car is located.

European models will feature the first-ever MyKey for this segment, which will enable parents of teenage drivers the ability to configure maximum speed and audio volume limits. It can also mute audio levels until seat belts are fastened. MyKey also keeps safety systems from being deactivated by younger drivers.

The 2014 Ford Fiesta will be powered by the award winning 1.0-litre EcoBoost engine. Actual fuel mileage numbers have not been released, but Ford says it is expected to deliver best-in-class fuel economy. Ford is already using the 1.0-liter EcoBoost extensively in Europe in the Ford Focus and is already proving to be a success. About 30 percent of new Focus buyers in recent months have opted for the 1.0-liter EcoBoost. You can read more about the powerful, fuel-efficient 1.0-litre EcoBoost engine by clicking here.

Ford will release more details about the new 2014 Fiesta at the Paris Motor Show in September.