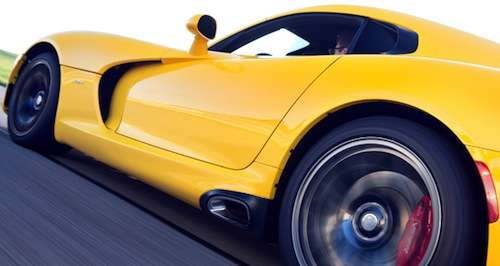 The SRT Viper isn’t resting on its laurels as one of the best handling sports cars on the planet, and the 2013 fifth generation model gets major suspension enhancements.
Advertisement

The SRT Viper was already a great handling supercar on the race track and could outperform many cars costing thousands more. Any good automaker knows they have to improve their product to stay competitive in the market and SRT engineers and designers went to work to improve the handling of the fifth generation Viper. They did it by reworking major components on both the suspension and chassis.

Major changes front and rear to the suspension

The front and rear of the new Viper received some major updates. In order to stay firmly planted on the track, the fifth generation supercar gets bigger tires in front and back. SRT engineers also gave the new car a wider track on the front that they say will reduce understeer. The combination of wider tires and changing the offset of the front tires leads to improved handling in the corners.

In the rear, engineers were able to incorporate the shock towers more into the trunk area to stiffen the overall structure which results in an increase travel of the suspension. Toe link was also moved from behind the centerline of the rear axle to in front of the axle centerline. Chrysler says this will add stability on corner exit under power. “The driver can now drive the car harder with more power out of turns.”

Other changes will also contribute to increased suspension performance on the 2013 SRT Viper. The hydraulic steering has been retuned, the T-bar was stiffened and the steering valve also retooled as part of a hydraulic system. This should lead to more intuitive steering. The new Viper GTS also adds two driver-selectable modes; street or race, for further improved track capability.

The Viper is built to be driven hard on the track and SRT engineers didn’t leave the chassis untouched. The SRT Viper features a new chassis that shed overall weight, while at the same time increased torsional rigidity. Engineers added additional thickness to the frame using a higher-gauge steel in key areas, which helped save weight in other areas. The SRT team looked for other key areas to strengthen.

They first, looked at how to better support the rear shock tower in the rear trunk pan area. But the biggest change was the addition of an aluminum X-brace under the hood, which weighs less than 15 lbs. The lightweight X-brace ties the four corners of the engine bay and plays a significant role in helping to increase the overall torsional stiffness of the chassis by 50 percent. The 2013 chassis is both stronger and lighter than the previous generation.

When you add up all the changes made to the new 2013 SRT Viper, the result is a final product that will be a better handling race car on the track. And it was well said by SRT, “For a vehicle that has been dubbed a race car with a license plate, that's a must.”

2013 SRT Viper available with more options than ever