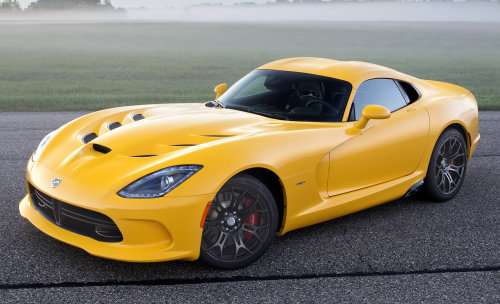 The 2013 SRT Viper is a whole new breed of supercar from the 2010 Dodge Viper SRT10 that came before it with more power, new high tech gadgetry to boost performance and an interior trim that is more proper of a car in the supercar class. While the older Vipers were all about going fast – questionably at the expense of luxury and comfort – the 2013 SRT Viper and Viper GTS are intended to offer better performance but also a more engaging driving experience. However, that power, technology and comfort comes with a cost.

The 2013 SRT Viper (shown on the right in yellow) begins with the new all aluminum 8.4L V10 engine, packing 640 horsepower and 600lb-ft of torque carries a starting price of $97,395 plus the destination fee of $1,995 for a base price of $99,390. Aside from the retuned suspension and the 640 horsepower drivetrain, the 2013 SRT Viper packs a sleek new exterior and the refined interior while still offering what Chrysler calls “a blend of extreme performance and deliberate preservation of what has become the iconic DNA of the Viper”. In short, the basic SRT Viper packs a similar (yet higher performance) driving experience as the original Viper. However, this does not include the dual mode suspension system that should help make the new Viper one of the best handling supercars in all the world.

If you want even more performance out of your new Chrysler supercar, there is the new 2013 SRT Viper GTS (shown in the gallery on the right – click a thumbnail to view) which builds on the base SRT Viper with the same 640hp 8.4L V10 but the GTS model adds the new dual mode active suspension system….all of which carries a total starting price of $122,390. This premium package allows the new Viper the improved handling characteristics that one would expect of a proper modern supercar while also offering a smooth ride when ultra high performance handling capabilities are less important than ride quality. The 2013 SRT Viper GTS also comes with a unique hood, unique “Venom” wheels, a Nappa leather interior package and a 12 speaker Harman Kardon sound system mated to an enhanced infotainment system. 2013 Viper GTS buyers can also opt for the SRT Touring Package which adds StopTech slotted/vented lightweight two piece rotors and unique lightweight wheels with higher performance tires - ultimately lowering the weight of the 2013 Viper GTS to just 3297 pounds. You can click here for more details on the attributes and differences of the Viper and Viper GTS.

The entry price of the 2013 SRT Viper base model of $97,395 is well below the base price of the 2013 Chevrolet Corvette ZR1, which is realistically the new Viper’s closest competition (and only real competition in the American auto industry) – exotic supercars not considered. It should be noted that the new Viper will compete with the majority of European supercars as well for a fraction of the price but when it comes down to the brass tacks…the ZR1 is the new Viper’s biggest concern and the ZR1 starts at $112,600. The SRT Viper entry price is some $15k lower than the starting price of the 2013 Chevrolet Corvette ZR1 while the 2013 SRT Viper GTS - which is likely going to prove to be a better comparison for the ZR1 – starts roughly $7,800 higher than the super-Vette.

Production of the 2013 SRT Viper will begin in November at the Conner Avenue Assembly Plant in Detroit with dealer orders beginning mid November. Chrysler has stated that only about 20% of dealerships around the country will get to carry the new SRT supercar and we can expect more about the local availability closer to the production launch.

Along with the announcement of the 2013 SRT Viper pricing, the Chrysler Group also offered up the 7 minute video below offering a look at the history of the fabled American supercar. Enjoy.