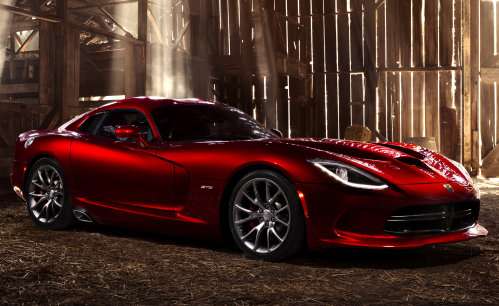 The automotive world has known for ages now that the 2012 New York International Auto Show would introduce the world to the next generation of the fabled Dodge Viper-turned SRT Viper but when the press conference ended just a few minutes ago, the world was not introduced to one but rather three new versions of the gorgeous 2013 SRT Viper – the standard Viper, the Viper GTS and the new Viper GTS-R race car.
Advertisement

The rebirth of an American legend
SRT brand CEO and President Ralph Gilles began the presentation by walking the media in attendance and the millions watching around the world through the reinvented supercar, pointing out special aspects of the 2013 SRT Viper like the low curb weight of just 3,354lbs (100lbs lighter than the 2010 Viper) and the output of the 8.4L V10 engine – now producing 640 horsepower and 600lb-ft of torque. A new frame featuring an x-brace, magnesium supports and loads of high strength steel, the 2013 SRT Viper chassis is 50% stiffer than the 2010 models which, when combined with the low curb weight and the increase in power should allow the 2013 Viper to stake its claim as one of the best performing cars in the world. Most importantly, Gilles stressed that the 2013 SRT Viper was designed in Auburn Hills and it will be built at the Detroit Connor Avenue – accentuating the authenticity of this truly American supercar.

“The SRT Viper model is meant to offer a perfect blend of extreme performance and a deliberate preservation of what has become the iconic DNA of the Viper,” Gilles added. “We strove to deliver a supercar that continues to bring the driver as close as possible to the machine.”

Gilles went on to explain that the 2013 Viper will also feature a new SRT Track Package that cuts the final weight to just 3,297lbs – making for a final power to weight ratio of 5.15 pounds per horsepower. For comparison, the supercar world uses “dry horsepower to weight ratio” to compare numbers on an even plane and when the specifications of the 2013 Viper are applied to those techniques, the result is a ratio of 4.91 pounds per horsepower. This figure puts the 2013 Viper third among the world’s most powerful and fastest supercars, trailing only the 1,000+ horsepower Bugatti Veyron (4.10) and the brand new Ferrari F12 (4.17). The ratio of 4.91 puts the 2013 Viper above such notable supercars like the new Lamborghini Aventador (4.96), the Chevrolet Corvette ZR1(5.01) and the new Porsche 911 Turbo (6.22)…reinforcing the obvious fact that the new Viper is instantly among the best supercars in the world before it even sets foot on a track.

2013 SRT Viper – design inside and out
The 2013 SRT Viper begins on the outside, where the SRT engineers have called heavily upon the design of the original Dodge Viper GTS Coupe in styling the sides, roof and rear of the car. The lines of the 2013 Viper are remarkably similar to those of the 1999 Viper GTS but unlike the original hardtopped Viper, the 2013 model has a body comprised mostly of lightweight carbon fiber. The hood, roof and decklid are all carbon fiber while the doors and door sills are constructed from superformed aluminum for a body that is 32% lighter than the previous Viper body. The front end is where the 2013 Viper differs the most from the old school Viper with a fresh front end design, large LED projection headlights bracketing the sunken, darkened crosshair grille and air extraction openings in the traditionally designed clamshell style hood flanking the large air intake opening. Out back, the Viper has a rear end that flows back from the rounded quarter panels, once again very similar to the original Dodge Viper GTS Coupe but a set of angular new LED taillights gives the 2013 Viper a very distinct look. The back end of the new Viper is finished off with a “dole light” or third brake light that is the new Viper Striker logo, integrated into the subtle rear spoiler.

The interior of the 2013 SRT Viper begins with a fit and finish that Chrysler feels is more appropriate for the supercar world, adding a touch of luxury to the sporty layout. This begins with race style seats that were sourced from Sabelt; the same company that supplies seats for the current Ferrari lineup. Throughout the interior, the 2013 Viper features wrapped surfaces and for those who opt for the new 2013 Viper GTS – nearly every interior surface is wrapped in leather with a variety of color choices. The 2013 SRT Viper includes a similar gauge cluster to the one found in the new Dodge Dart but with customizations made to fit better into the new supercar. This includes a large central screen that offers tons of viewing options inside of the massive tachometer while the speedometer sits on the left side and the fuel gauge/temperature gauge sit on the right side. The new Viper also includes a 8.4 inch touch screen mounted in the center stack that includes controls for the HVAC, stereo system, navigation and the SRT gauges that we love in the Charger SRT8 – with all sorts of gauge options as well as an accelerometer that can measure things like braking distances and quarter mile times. Finally, while some cars have built in shift lights, the 2013 Viper includes a “shift snake” – where the entire central section of the tachometer lights up with the Striker Viper logo in bright red when it’s time to shift.

The 2013 SRT Viper will be available in Black or Adrenaline Red as standard colors while the options of Race Yellow, Bright White, Shadow Blue Pearl, and Gunmetal Pearl are available for an upcharge with optional stripes in Black, Billet Silver, or Gunmetal. The 2013 SRT Viper GTS includes Black, Adrenaline Red, Race Yellow and Bright White as standard choices while Shadow Blue Pearl, Gunmetal Pearl and the GTS-exclusive Stryker Red Tinted Pearl are available for an upcharge and the GTS features unique stripes available in those same colors.

The drivetrain of the new Viper
The heart of the 2013 SRT Viper is the 8.4L V10 which, surprisingly, is the same engine size as the mill found in the 2010 Viper considering that amny rumors suggested that the new Viper engine would be larger. This new version of the 8.4L V10 motor weighs 28 pounds less than the 2010 engine but more importantly, the new V10 produces 640 horsepower and 600lb-ft of torque – making it the most powerful naturally aspirated engine in the world. This new lighter engine was achieved thanks to a new composite intake manifold, high strength forged pistons, sodium filled exhaust valves, new catalytic convertors to reduce weight and back pressure and a new aluminum flywheel that helps increase the amount of power that makes it to the rear wheels. This powerful new engine is mated to a Tremec 6-speed manual transmission that features a new shifter, closer ratio gearing and an increased final drive ratio of 3.55 (previously 3.07). This should afford the 2013 SRT Viper better acceleration without hurting what will likely be a 200+ mile per hour top speed (actual top speed has not been specified yet by Chrysler).

Once the power was taken care of, Chrysler engineers turned their attention to the handling capabilities of the 2013 SRT Viper. This begins with the stiffer chassis that we mentioned above and continues with a revised suspension system that improves driving dynamics. Next, the SRT engineers added a specially tuned 4-mode traction and stability control system that can is controlled from the steering wheel mounted buttons. This traction and stability system allows the new Viper to meet government requirements but the multiple modes allow the driver to control just how much nannying the new Viper will do during stints of spirited driving. This system includes a launch control system that should make drag racing the new Viper much easier and for the very first time – the 2013 Viper includes cruise control.

SRT worked with the people at Pirelli tires to design a new P Zero tire specifically for the 2013 Viper, measuring 275/35/18 in the front and 335/30/19 out back. These new skins are wrapped around five spoke polished “Rattler” wheels on the standard Viper while the Viper GTS sports a set of “Venom” split six spoke polished wheels with the same tires. Those Viper buyers who don’t care for the polished wheel look can opt for the Rattler wheels in hyper black or matte black for the SRT Viper or the Venom wheels of the Viper GTS in the same gloss or matte black finishes. Finally, those buyers who select the SRT Track Package will get their Viper fitted with a unique set of lightweight race rims in hyper black, wrapped in special Pirelli P Zero Corsa tires for improved traction.

Two trimlines for the 2013 Viper
The 2013 SRT Viper will be offered to the public in two forms – the standard SRT Viper and the SRT Viper GTS. The Viper GTS adds a wide variety of high tech goodies inside and out for the ultimate luxury supercar experience. The GTS package begins by adding two-mode active suspension that allows a comfortable ride when cruising and incredible handling measures when it matters; preventing a Viper owner from having to compromise ride quality for handling. The GTS package also includes a unique hood, the Venom wheels that we mentioned above, a Nappa leather interior package, a 12 speaker Harman Kardon sound system mated to an enhanced infotainment system and the SRT Touring Package. The GTS package is, for now, the ultimately trimline for the 2013 SRT Viper – combining cutting edge performance technology with all of the comforts and luxuries expected from a modern supercar. However, those who can do without these gadgets and want the more basic Viper experience, the SRT Viper could be the supercar for you. The only real performance difference is the dual mode suspension system which is unfortunately (for standard SRT Viper owners) only available right now with the Viper GTS.

Finally, those 2013 SRT Viper buyers who demand even better performance can opt for the SRT Track Package. This includes StopTech slotted/vented lightweight two piece rotors and unique lightweight wheels with higher performance tires (discussed above) – ultimately lowering the weight of the 2013 Viper to just 3297 pounds.

In addition to the 2013 SRT Viper and 2013 SRT Viper GTS, the SRT Motorsports division announced the return of the Viper GTS-R for the American LeMans racing series. The GTS-R will not be street legal but this new race car should help the Viper reclaim the racing greatness seen during the 1990s with the early Dodge Viper race cars.

Check out the gallery on the right for a closer look at the 2013 SRT Viper and the (very long) video below offers moving shots of the incredible new American supercar. The video is about 7 minutes long but if you have the time – it’s worth watching.