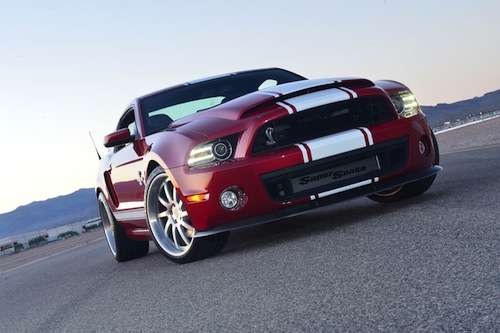 The 2013 Shelby GT500 Super Snake, a 50-state-legal emission compliant vehicle, produced staggering performance with a series of mid-10-second runs at over 135 mph.
Advertisement

Staying true to the Shelby name, the 2013 Super Snake produces “staggering performance” for a 50-state-legal, emission compliant vehicle. Starting in 2008, previous 2007 Shelby GT500 Mustangs could be sent to Carroll Shelby's Special Performance Plant in Las Vegas Nevada to be rebuilt into a Super Snake. The 2013 Shelby Super Snake follows in the tradition of previous models like the Shelby 1000 with increased horsepower and handling as the Shelby American team does their magic.

The ultra-high-performance 2013 Super Snake is one of the last of it’s kind and produces these results using pump gas and street legal tires. Shelby American takes the stock 2013 Shelby GT500 with 662 horsepower and adds a Ford Racing Whipple or optional Kenne Bell supercharger upgrade and takes the Super Snake to a level that’s beyond anything else on the road.

Shelby American does their magic

When Shelby American adds a finely tuned suspension package, bigger brakes and Shelby performance cooling package, this Mustang is unequaled on the track and one of the fastest street-legal cars on the planet. The mid ten-second quarter mile runs are incredibly fast and the independent test driver that made the test runs for Shelby American was impressed to say the least.

The independent test driver concluded that, “the 2013 Super Snake is one of the most amazing Mustangs we’ve driven and is the fastest and most responsive Mustang we’ve tested to date. It makes every bit of the advertised 850 horsepower, and we put it to the test on the track. It produced a series of mid-10-second runs at over 135 mph, which is staggering performance for a 50-state-legal, emission compliant vehicle. Our best run clocked a 10.66 second time at 137 mph with Nitto NT555R street tires.”

While the supercar can be driven on any street in America, with 850 horsepower under the Shelby-specific hood, it would be very hard to keep from getting speeding tickets. But John Luft, president of Shelby American thinks it's actually possible. He says, “But it’s more than just raw power and ridged track performance. Owners can drive this car every day with its docile and comfortable ride in normal traffic situations.” We say, good luck with that, because any performance enthusiast would have to unleash all that power.

The 2013 Shelby GT500 Super Snake is bred for the track and it can’t be kept in the stable. And with a little more modifications with a true drag race setup, the ultra-performance Mustang would likely produce quarter mile runs in the nine second range. But with Launch Control and a newly revised suspension, the supercar provides a comfortable ride quality for the street.

Get one while you can

While we don’t know how much longer Shelby American will be building the Super Snake, interested customers can still buy one of these incredible cars. The 2013 Shelby GT500 Super Snake post-title package starts at $28,995.00 for the 662 HP version and $39,995.00 for the 850 horsepower model, not including the base car. Only 500 of these cars will be built, all at the Shelby American factory in Las Vegas.