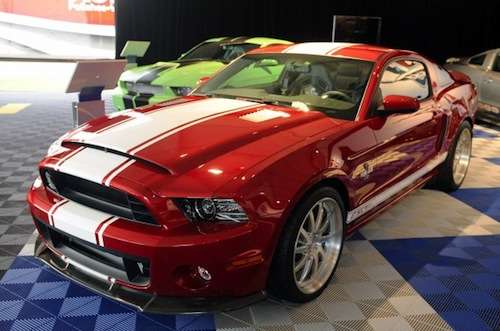 The 2013 Shelby GT500 Super Snake prototype was on display at Pebble Beach this past weekend and snuck in under the radar.
Advertisement

At this past weekend’s Pebble Beach Concours d’Elegance, everyone was excited to see the 2013 Ford Mustang Shelby GT500 Cobra that was built in honor of the late Carroll Shelby. But another very special Shelby GT500 made its debut that didn’t get all the fanfare that the Cobra did. A production ready 2013 Shelby GT500 Super Snake prototype that Shelby American has built, was on hand for its pre-production debut.

Starting in 2008, previous 2007 Shelby GT500 Mustangs could be sent to Carroll Shelby's Special Performance Plant in Las Vegas Nevada to be rebuilt into a Super Snake. The 2013 Shelby Super Snake will follow in the tradition of previous models like the Shelby 1000 with increased horsepower and handling as the Shelby American team does their magic.

The team will rebuild the 2013 Shelby GT500 with Super Snake specific parts. While Shelby American has not given any specifics on the production vehicle, we know from past models that the Super Snake will get a bump in horsepower.

That will be a challenge for the Shelby American team because the standard car has such incredible performance. The whole idea behind the Super Snake is to bring a faster version of the base model. The Shelby American team will accomplish that by going through the suspension, brakes and by taking weight out the Shelby GT500. The team will make the Super Snake lighter through the extensive use of carbon fiber.

The previous generation Super Snake saw a huge horsepower increase of 250 horsepower. The same incremental gains will be hard to match this year due to the 2013 Ford Shelby GT500 already being the most powerful production V8 in the world. But the 2013 Super Snake will get special modifications to the outside styling, bigger brakes, improved handling and increased cooling capacity.

As with the previous generation Super Snake, look for the 2013 version to get a Shelby-specific hood, unique striping, Super Snake graphics, a carbon fiber front splitter and 20-inch three-piece forged aluminum wheels. The engine will get the increased horsepower through the use of a Whipple supercharger from Ford Racing and other internal modifications. In the previous generation Super Snake, it was updated with larger 6-piston Baer brakes, front and rear brake cooling ducts, complete track setup suspension, aluminum driveshaft, 3.73 differential gears and cat-back exhaust system.

Inside the Super Snake will get special treatments including Super Snake embroidery on the Recaro seats, a white ball short-throw shifter, a 3-gauge cluster on the A-pillar and custom door sills.

While Shelby hasn’t released details on the 2013 Super Snake, we know it will continue to be inspired by the 1967 GT500 Super Snake built by Carroll Shelby for Goodyear tires. The 2013 Ford Shelby GT500 Super Snake will be an awesome performance supercar.