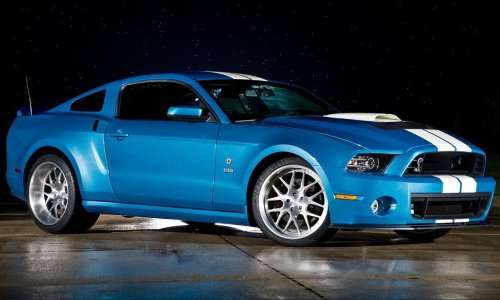 The Friends of Carroll Shelby group is comprised of a wide variety of people and companies from around the automotive industry including Ford Motor Company, Ford Racing, Shelby American and many more. The group began with the 2013 Ford Shelby GT500 - the final production model on which Mr. Shelby worked before passing away earlier this year – adding a variety of unique items inside, outside and under the hood to transform the 2013 GT500 into the unique GT500 Cobra.

"Even at 89 years of age, Carroll was an inspiration to us all," said Jim Farley, vice president for sales and marketing for Ford Motor Company. "This year marks the 50th anniversary of the original Shelby Cobra. This car represents the very idea he had about making the 2013 Shelby GT500 into a true Cobra."

First off, the 662 horsepower 5.8L supercharged V8 from the production 2013 Shelby GT500 has been fitted with a 4.0L Whipple/Ford Racing supercharger and the accompanying tuning efforts to increase the output into the range of 850 horsepower. Helping to get traction with all of that power is a unique set of 20 inch rear wheels that measure a whopping 13 inches wide, wrapped in high performance 345 series tires for optimum grip. Up front are more standard 20x10 rims wrapped in similar high performance tires to ensure that the GT500 Cobra handles as well as it accelerates. Tucked until those gigantic wheels is a Shelby/Wilwood braking package that helps slow down the ultimate muscle car from speeds that are likely well above the 200mph range. It should be noted that these unique bright silver wheels look great as well.

Fitting those huge 345 tires under the rear end wasn’t easy, as the 2013 Ford Shelby GT500 Cobra has been fitted with a unique wide body rear section that gives the Cobra a much wider stance and a look all its own. This wide body package includes a flare where the body lines of the door flow smoothly into the quarter panel with a vent mounted high in the quarter panel. Up front, the exterior of the 2013 Ford Shelby GT500 Cobra wears a unique version of the standard production GT500 hood with a low profile hood scoop that is similar to what was found on the original Shelby Mustangs of the 1960s. The exterior upgrades are finished off with unique Shelby and Ford Racing badges on the fenders and a paint scheme that was found on so many Shelby race cars over the years featuring Guardsman Blue paint with Wimbledon White dual stripes.

"Carroll Shelby changed the performance world forever," says Shelby American president John Luft. "And while he was proud of Shelby American's achievements, Carroll was far more interested in the next car we build. You will find the spirit and influence of Carroll Shelby in every future vehicle we build as found in the rear wide-body kit and hood integrated into the 2013 Shelby GT500 Cobra."

Unfortunately, since Ford Motor Company and Shelby American chose the snooty Monterey California venue to debut the incredible 2013 Ford Shelby GT500 Cobra, the 850 horsepower super-muscle car will not be found in the Woodward Dream Cruise’s Mustang Alley this weekend. However, it has been promised that the car will tour the country over the next few months – offering enthusiasts around the US a chance to see the Carroll Shelby tribute Mustang.

It is unclear as to what will come of the 2013 Ford Shelby GT500 Cobra once it is done touring the country over the next few months but Ford’s Jim Farley provided a hint with the following comment: "You might also know that Carroll was a philanthropist, noted for supporting causes that moved him. In that spirit, this car will be taken on tour around the country, and hopefully will be used in a special way at the end of its tour, a way Carroll would appreciate."

Based on that, we are led to believe that the 2013 Ford Shelby GT500 Cobra will head to an auction block in the future with the proceeds benefiting any one of the charities which Mr. Carroll Shelby supported during his incredible life. It is a truly beautiful car and being such a rare and unique piece of American motoring history, it would most certainly bring big money from a deep-pocketed collector.