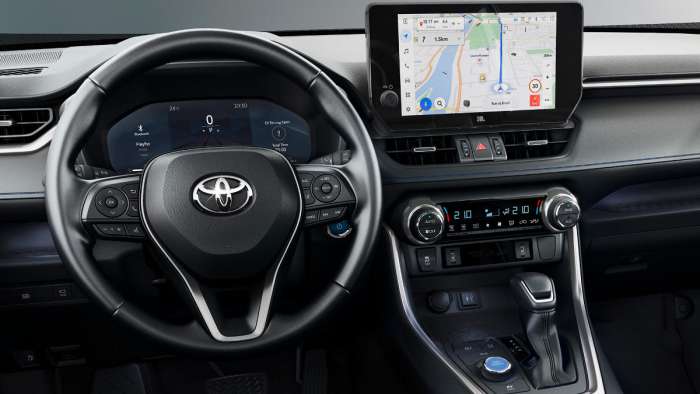 One change RAV4 shoppers and fans have wished for is a new infotainment system. Here is why the 2023 RAV4, RAV4 Hybrid, and RAV4 Prime may be a bit easier to use in the coming model year.
Advertisement

Toyota Europe has announced that the 2023 RAV line will get an updated infotainment and multimedia system for 2023. The new system will address some of the weaknesses of this very popular crossover SUV line.

Toyota says the new infotainment system will feature wireless Apple CarPlay standard, but that Android users (globally the largest majority) will still have to plug in. There was no indication that an over-the-air update to address the Android plug would be coming later.

A glance at the old vs the new infotainment screen shows that the new one has one knob, for volume, versus the two that are now present on the U.S. spec RAV4 line’s screen. The RAV4 seems to be getting a version of the new multimedia system Toyota and Lexus has been rolling out. To our eyes, it looks just like the one in the new Lexus NX line and Toyota Venza line. Both share a lot with the RAV4.

Does anyone use native built-in nav anymore? We can’t imagine why if they do, given Google Maps’ superiority in so many ways. In any event, Toyota’s new system will have optional Nav. For those who opt out of using their phone’s better Nav, Toyota will supply a subscription-based Nav that is included (in Europe) for four years.

Toyota says there are added ways to communicate with your 2023 RAV4 using the new onboard voice agent. It will respond to spoken requests to do things like adjusting the climate control, choose multimedia options, make a phone call, or open and close the windows. Called “Hey Toyota,” it is designed to understand conversational speech, so if you say “I’m cold” it will respond by closing the windows or raising the air conditioning temperature.

New for 2023, the RAV4 introduces a new digital combimeter with a 12.3-inch TFT display in the driver info display that comes with flexible display settings. A choice of four styles and three layouts are available. Four different style themes called Casual, Smart, Sport, and Tough offer a more customized look-and-feel of. The new TFT combimeter is standard on all grades apart from the entry-level model which uses a 7-inch version.

The RAV4 is a global vehicle for Toyota, so we assume these changes will apply to the North American versions of the RAV4 line. Watch for a formal announcement from Toyotas North America shortly.

Dan G. wrote on June 22, 2022 - 6:29pm Permalink
Well, my new Volvo XC60 T8 ER has Google OS with Google Maps native in the infotainment screen. And my 2019 Porsche Macan (and my 2018 Panamera 4 ST E-Hybrid before that) both have a great "native" map and navigation system in the Porsche PCM screen -- none of which need Apple CarPlay for that reason.
Don wrote on June 25, 2022 - 11:07pm Permalink
I've lost the ability to use goggle maps off my phone in some high mountain areas. Wish I had a nav system in those areas.
Mircea Munteanu wrote on June 27, 2022 - 2:12pm Permalink
Dedicated navigation it's very useful when you don't have cell phone data coverage, or up in the mountains, as all the maps are already in memory,
Alhadi swerry wrote on June 27, 2022 - 3:34pm Permalink
What about the price of Toyota Camry